Question 1. Which of the following are matter?

Question 2. Give reasons for the following observation:

The smell of hot sizzling food reaches you several metres away, but to get the smell from cold food you have to go close.

Answer : The smell of hot sizzling food reaches us several meters away because as the temperature increases the rate of diffusion becomes high

Question 3. A diver is able to cut through water in a swimming pool. Which property of matter does this observation show?

Answer : A diver is able to cut through water in a swimming pool, this shows that the particles of water have a lot of intermolecular space and have less inter molecular force of attraction.

Question 4. What are the characteristics of the particles of matter?

Answer : The characteristics of the particles of matter are:

(1) Particles of matter have space between them.

(2) Particles of matter are continuously moving.

(3 ) Particles of matter attract each other.

Question 1. The mass per unit volume of a substance is called density. (density = mass/volume). Arrange the following in order of increasing density – air, exhaust from chimneys, honey, water, chalk, cotton and iron.

Question 2. (a) Tabulate the differences in the characteristics of states of matter. 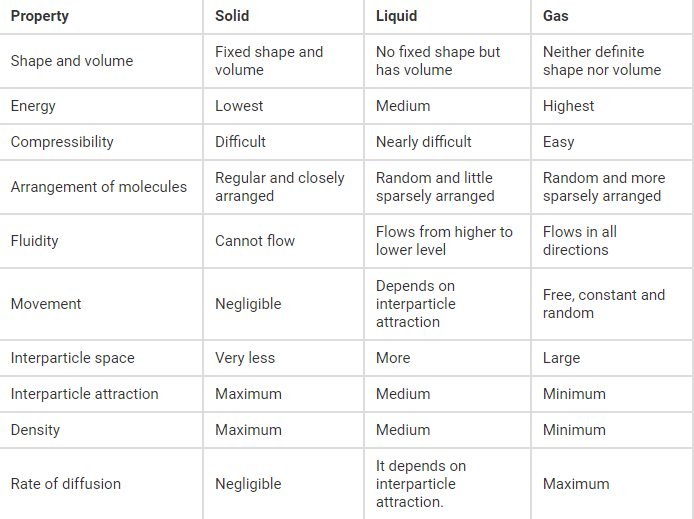 Answer : Rigidity– The tendency of a substance to maintain their shape when an external force is applied on it. Solids have rigidity.

Compressibility – When an external force applied on the matter it bring the particles of matter closer and increases its density. Liquid and gas are compressible but solid does not.

Fluidity- The tendency of a particle to flow is known as fluidity. Liquids and gases can flow.

Filling of a gas container- Gases have particles which randomly vibrate in all the directions. Thus the gas can fill the container.

(a) A gas fills completely the vessel in which it is kept.

Answer : Because of the high kinetic energy the molecules of gas keep moving randomly in all directions and hence a gas fills completely the vessel in which it is kept.

(b) A gas exerts pressure on the walls of the container.

Answer : Because of the high kinetic energy the molecules of gas keep moving randomly in all directions. They constantly vibrate, move and hit the walls of the container thereby exerting pressure on it.

(c) A wooden table should be called a solid.

Answer : A wooden table should be called a solid because of the following points.

(d) We can easily move our hand in air but to do the same through a solid block of wood we need a karate expert.

Answer : Because, there is a less force of attraction between the particles in air. So, very less amount of external force can break it.

But the force of attraction is very strong and the molecular space is so high in the case of solids. Hence a large amount of force via karate expert is required to break it

Question 4. Liquids generally have lower density as compared to solids. But you must have observed that ice floats on water. Find out why.

Answer : Ice is Solid but due to its cage like structure with lot of vacant spaces,the density of ice is less than the density of water. Thus it floats on water.

Question 2. What is the physical state of water at:

(b) At 100°C – It is at the transition state as the water is at its boiling point. Hence it would be liquid as well as gas.

Question 3. For any substance, why does the temperature remain constant during the change of state?

Answer : It happens due to latent heat concept. The heat supplied is used up to transform the state of matter of the substance hence the temperature stays constant.

Answer : We can liquefy atmospheric gases by either increasing the pressure or decreasing the temperature which ultimately leads to the reduction of spaces between molecules.

Question:- 1. Why does a desert cooler cool better on a hot dry day?

Answer:- On a hot, dry day, the temperature is high and the humidity is low, allowing for better evaporation. Evaporation at high levels provides higher cooling effects.

Question:- 2. How does the water kept in an earthen pot (matka) become cool during summer?

Answer:- Because the earthen pot is porous and has many pores, water seeps out through these pores and evaporates at the pot’s surface, resulting in a cooling effect. As a result, the pot becomes cold, and the water within the pot cools as well.

Question:- 3. Why does our palm feel cold when we put some acetone or petrol or perfume on it?

Answer:- Acetone, petrol, and perfume are examples of volatile chemicals that evaporate when exposed to air. Evaporation is made easier as it consumes energy from our palms, resulting in a cooling impact on our hands.

Question:- 4. Why are we able to sip hot tea or milk faster from a saucer rather than a cup?

Answer:- Because a saucer has a bigger surface area than a cup, it makes faster evaporation, allowing the tea or milk to chill off faster.

Question:- 5. What type of clothes should we wear in summer?

Answer:- cotton clothes should we wear in summer because light colours reflect heat and cotton fabrics have pores that absorb sweat and facilitate evaporation, giving in a cooling impact on the skin.

Question:- 1. Convert the following temperatures to the celsius scale.

Question:- 2. Convert the following temperatures to the kelvin scale.

Question:- 3. Give reason for the following observations.

(a) Naphthalene balls disappear with time without leaving any solid.

(b) We can get the smell of perfume sitting several metres away.

Question:- 4. Arrange the following substances in increasing order of forces of attraction between the particles— water, sugar, oxygen.

Question:- 5. What is the physical state of water at—

Answer:- (a) At 25°C is a normal room temperature so,  the water will be in liquid form at this temperature.

(b) At 0°C is its freezing point, hence the water will be in both solid and liquid form.

(c) At 100°C is its boiling point, hence the water will be both liquid and gaseous state.

Question:- 6. Give two reasons to justify—

(a) water at room temperature is a liquid.

Answer:-  Water is liquid at room temperature because it has a freezing point of 0°C and a boiling point of 100°C.

(b) an iron almirah is a solid at room temperature.

Question:- 7. Why is ice at 273 K more effective in cooling than water at the same temperature?

Answer:-  At this temperature (273K), water is less effective than ice because ice can easily create water by absorbing ambient heat energy, but water does not have this property because it already has latent heat of fusion and does not require additional heat. As a result, ice cools far faster than water at the same temperature.

Answer:-  Steam causes serious burns. It’s because it’s an exothermic reaction that releases a lot of heat that was absorbed during the vaporisation process.

Question:- 9. Name A,B,C,D,E and F in the following diagram showing change in its state. 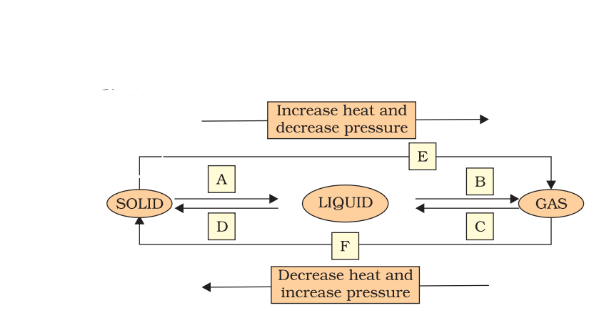 Answer:-A: Melting or fusion or liquefaction

B: Evaporation or vaporization