Thinking about the Text 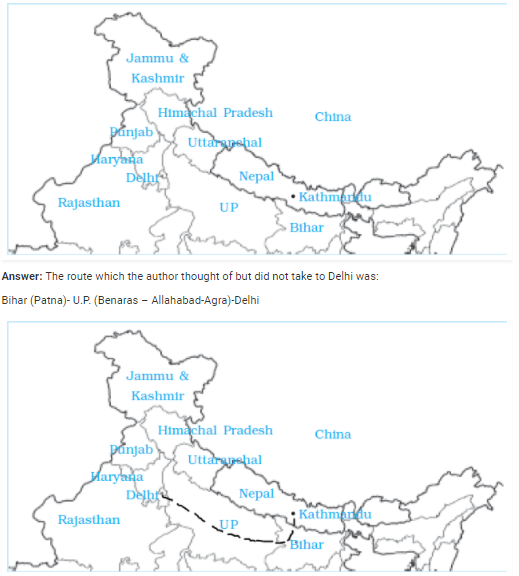 Question:- I. Answer these questions in one or two words or in short phrases.

Answer:- Vikram Seth compare to the quills of a porcupine with the flutes tied on the top of the flute seller’s pole.

Answer:- The following are the five kinds of flutes:-

Question:- II. Answer each question in a short paragraph.

Answer:-  The belief at Pashupatinath about the end of Kaliyug is that when a small shrine emerges fully on Bagwati river, the goddess within will escape, and the Kalyug’s evil period on Earth will come to an end.

(i) the atmosphere of ‘febrile confusion’ outside the temple of Pashupatinath (for example: some people trying to get the priest’s attention are elbowed aside…)

Answer:- (i) The atmosphere of ‘febrile confusion’ outside the temple of Pashupatinath: Priests, hawkers, devotees, tourists, cows, monkeys, pigeons and dogs roam through the grounds. A fight breaks out between two monkeys. One chases the other, who jumps onto a shivalinga, then runs screaming around the temples and down to the river. A group of saffron-clad Westerners tries to gain entry to the temple,  but they were not allowed to entered as the gate says that only Hindus are allowed in the temple .

(ii) the things he sees

(iii) the sounds he hears

Answer:- He hears car horns, bicycle bells, film songs from the radios, stray cows low and vendors shout out their wares. He also listens to the various flutes played by the flute seller.

Question:- III. Answer the following questions in not more than 100–150 words each.

Answer:- There is a sense of ‘febrile confusion’ in Pashupatinath. The surroundings are filled with priests, hawkers, devotees, tourists, cows, monkeys, pigeons, and dogs. Because there are so many worshippers, those attempting to receive the priest’s attention are elbowed aside by those rushing to the front. Whearas t here is a sense of calm around Kathmandu’s Buddhist shrine, the Baudhnath stupa. A road encircles its massive white dome. On the outskirts, there are a few small shops. Tibetan immigrants own the majority of the shops. There are no crowds, and this is a haven of peace in the midst of the busy streets.

Answer:- According to the author Kathmandu is vivid, mercenary, religious, with small shrines to flower-adorned deities along the busiest and narrowest streets. There are fruit sellers, flute sellers, hawkers of postcards, shops selling western cosmetics, film rolls and chocolate or copper utensils and Nepalese antiques. Many film songs blare out from the radios, cars horns sound, bicycle bells ring, stray cows low, vendors shout out their wares. The author purchases a corn-on-the-cob that has been roasted on the sidewalk in a charcoal brazier. He also buys orange juice and Coca-Cola.

Answer:- “To hear any flute is to be drawn into the commonality of all mankind.”

The poet says  A flute is both the most universal and the most specific of sounds. It can be found in any culture. He claims that the flute is linked to our shared traits. The driving force, like every human being, is live breath. It, too, must take a breather before continuing.