Question:- 1 Which of the following is not an instance of an exercise of a fundamental right?

b ) Christian missions set up a chain of missionary schools

c ) Men and women government employees get the same salary

d ) Parents’ property is inherited by their children

Answer:- d ) Parents’ property is inherited by their children

Question:- 2 Which of the following freedoms is not available to an Indian citizen?

a ) Freedom to criticise the government

b ) Freedom to participate in armed revolution

c ) Freedom to start a movement to change the government

d ) Freedom to oppose the central values of the Constitution

Answer:- b ) Freedom to participate in armed revolution

Question:- 3 Which of the following rights is available under the Indian Constitution?

a ) Right to work

b ) Right to adequate livelihood

Question:- 4 Name the Fundamental Right under which each of the following rights falls:

a ) Freedom to propagate one’s religion

b ) Right to life

Question:- 5 Which of these statements about the relationship between democracy and rights is more valid? Give reasons for your preference.

a ) Every country that is a democracy gives rights to its citizens.

b ) Every country that gives rights to its citizens is a democracy.

c ) Giving rights is good, but it is not necessary for a democracy.

Answer:- The most accurate statement is (a).

This is because every democratic country has a system in which the people elect the government. As a result, it is critical that it offer rights to its inhabitants.

Question:- 6 Are these restrictions on the right to freedom justified? Give reasons for your answer.

a ) Indian citizens need permission to visit some border areas of the country for reasons of security.

b ) Outsiders are not allowed to buy property in some areas to protect the interest of the local population.

c ) The government bans the publication of a book that can go against the ruling party in the next elections.

Question:- 7 Manoj went to a college to apply for admission into an MBA course. The clerk refused to take his application and said “You, the son of a sweeper, wish to be a manager! Has anyone done this job in your community? Go to the municipality office and apply for a sweeper’s position”. Which of Manoj’s fundamental rights are being violated in this instance? Spell these out in a letter from Manoj to the district collector. 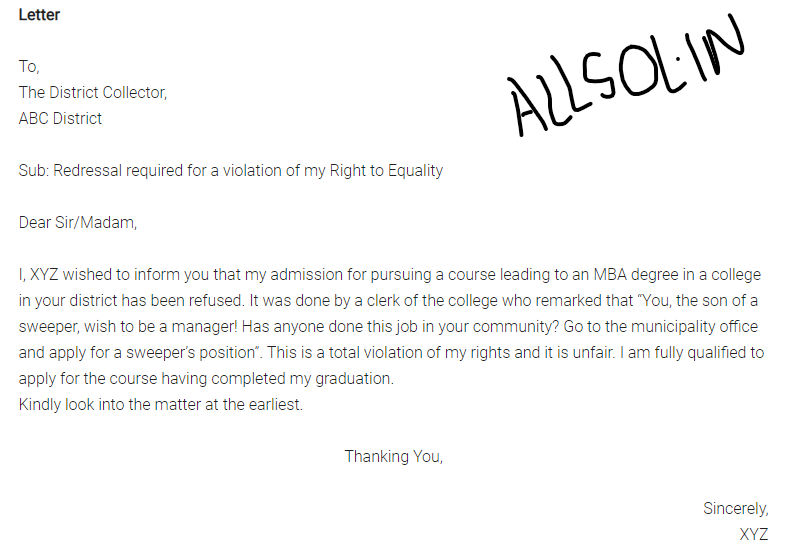 Question:- 8 When Madhurima went to the property registration office, the exercises Registrar told her, “You can’t write your name as Madhurima Banerjee d/o A. K. Banerjee. You are married, so you must give your husband’s name. Your husband’s surname is Rao. So your name should be changed to Madhurima Rao.” She did not agree. She said “If my husband’s name has not changed after marriage, why should mine?” In your opinion who is right in this dispute? And why?

Question:- 9 Thousands of tribals and other forest dwellers gathered at Piparia in Hoshangabad district in Madhya Pradesh to protest against their proposed displacement from the Satpura National Park, Bori Wildlife Sanctuary and Panchmarhi Wildlife Sanctuary. They argue that such a displacement is an attack on their livelihood and beliefs. Government claims that their displacement is essential for the development of the area and for protection of wildlife. Write a petition on behalf of the forest dwellers to the NHRC, a response from the government and a report of the NHRC on this matter.

Question:- 10 Draw a web interconnecting different rights discussed in this chapter. For example right to freedom of movement is connected to the freedom of occupation. One reason for this is that freedom of movement enables a person to go to place of work within one’s village or city or to another village, city or state. Similarly this right can be used for pilgrimage, connected with freedom to follow one’s religion. Draw a circle for each right and mark arrows that show connection between or among different rights. For each arrow, give an example that shows the linkage.