Answer:- (a) Cleaning of water is a process of removing pollutants.

(b) Wastewater released by houses is called sewage.

(d) Drains get blocked by  chemicals and kitchen waste.

Question:- 2. What is sewage? Explain why it is harmful to discharge untreated sewage into rivers or seas.

Answer:- Sewage is the term for the waste water that is discharged by homes. Untreated sewage should not be released into the sea because it contains toxins and hazardous germs that contaminate water and cause disease in those who drink it.

Question:- 3. Why should oils and fats be not released in the drain? Explain.

Answer:- Cooking oils and fats should not be released in the drain since they clog the pipes.

Question:- 4. Describe the steps involved in getting clarified water from wastewater.

Answer:-  The purification of water involves the following steps:

(i) All physical contaminants, such as stones, plastic bags, and cans, must be removed first. Water is passed through bar screens to accomplish this.

(ii) The water is then sent to a grit and sand removal tank, where sedimentation removes contaminants.

(iii) Solid pollutants, such as faeces, are recovered from the water’s bottom. Sludge is the term for the impurities gathered.

Question:- 5. What is sludge? Explain how it is treated.

Answer:-  Sludge is the solid waste collected from wastewater during treatment at a water treatment plant. Anaerobic microorganisms breakdown the sludge in a separate tank. Manure is made from activated sludge.

Answer:- Untreated human excreta can lead to a variety of health issues. It contaminates the water, air, and soil. Disease-causing bacteria can be found in dirty water, which can spread epidemics such as cholera and meningitis.

Question:- 8. Explain the function of bar screens in a wastewater treatment plant.

Question:- 9. Explain the relationship between sanitation and disease.

Question:- 10. Outline your role as an active citizen in relation to sanitation.

Answer:- We should take care of our personal environmental sanitation as active citizens. People should be made aware of the advantages of sanitation. We should assist municipal governments in covering all open drains and removing disease-causing material that have been put in them. 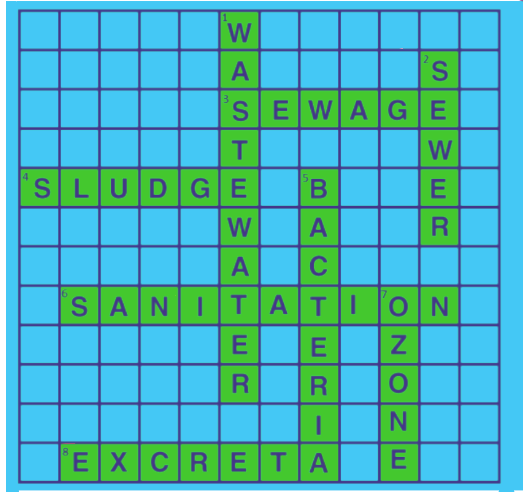 Which of these statements are correct?