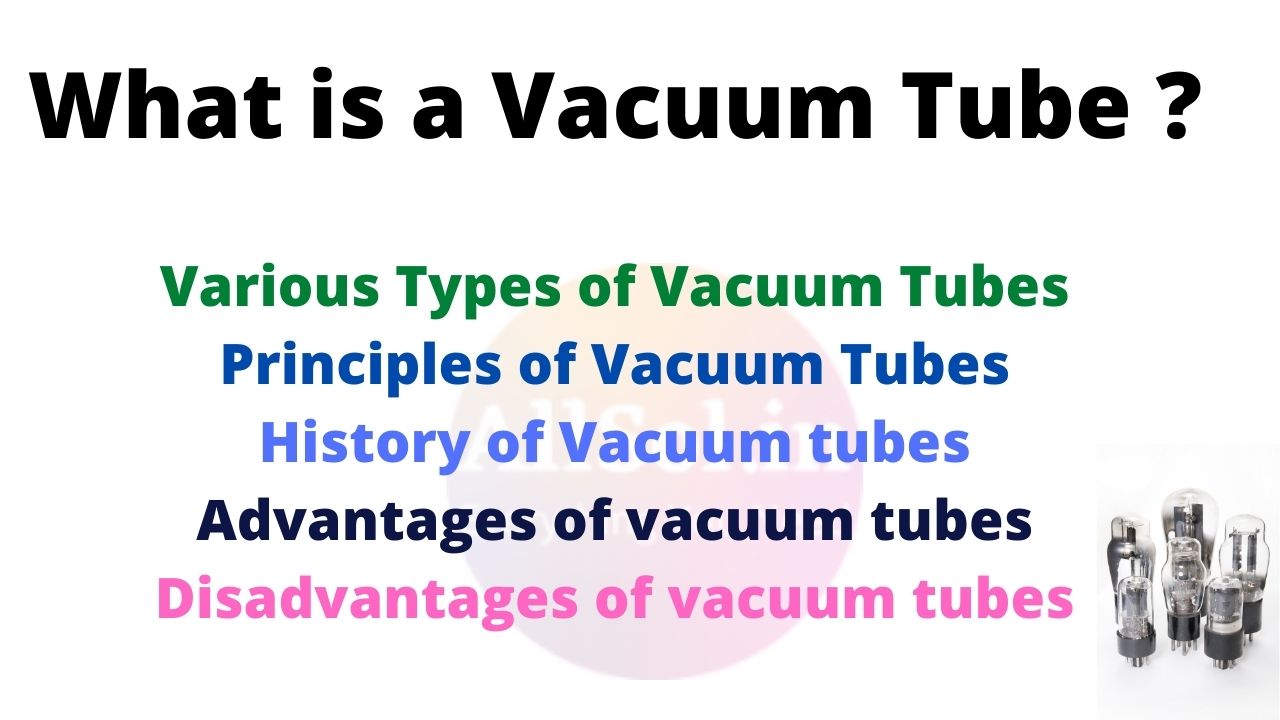 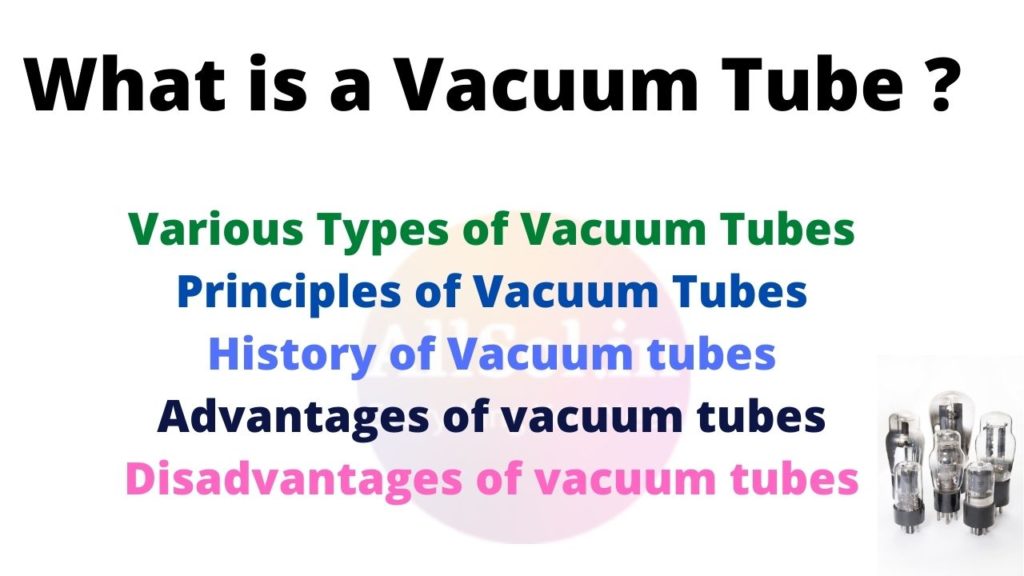 The vacuum tube was invented by John Ambrose Fleming in 1904 and is also known as an electron tube or valve. A vacuum tube is a glass tube that has had the gas within evacuated, resulting in a vacuum. Vacuum tubes have electrodes that regulate electron flow and were employed as a switch or amplifier in early computers. The image depicts a variety of vacuum tubes that have been utilised in various applications.

Computers might move away from mechanical switching and speed up the switching on and off of electron flow by employing vacuum tubes instead of mechanical relays. During the early part of the twentieth century, vacuum tubes were also utilised in radios, TVs, radar equipment, and telephone networks.

The transistor began to replace the vacuum tube in the 1950s because vacuum tubes were bigger, more delicate than a light bulb, and more costly. Transistors became more perfect to utilise as computer equipment became smaller in size due to their reduced size.

Vacuum tubes are still employed in high-end audio equipment today, and some audiophiles prefer them to digital systems.

What is a Vacuum Tube ?

The vacuum tube is a device that comprises electrodes to regulate electron flow and was invented by English scientist John Ambrose Fleming for the first time in 1904. It’s usually used to regulate flow in a sealed container with the aid of a vacuum. It was also utilised as a switch or an amplifier in early computers, and it is sometimes known as a valve or an electron tube. A different type of vacuum tube is shown in the image below.

It was used in televisions, sound recording, industrial automation reproduction, radar equipment, radios, and telephone network systems during the first half of the 1900s, and it is the predecessor of the modern transistor, which means that the vacuum tube was used in creative ways as electronically controlled rectifiers, oscillators, switches, and amplifiers, just as transistors are used today.

The CRT (cathode ray tube) was frequently used as a screen in earlier computer displays and TVs. It is a type of vacuum tube. It was initially created as a basic component for electronic devices in the early part of the twentieth century, and it was most often utilised in the advancement of analogue and digital computers.

The vacuum tube, which is formed of a cathode, creates electrons and an anode, and the anode, which is called a diode, gathers the electrons. There were, however, various types of vacuum tubes available, which were classified according to the number of electrodes they included. The electrodes are then encased in glass in a casing, which, when sufficiently charged, may operate as a conductor with all the air removed. Lightning creates a conduit for electrons to go through the air in the same manner as lightning does. Due to the curvature of the vacuum, it is usually referred to as a vacuum tube.

In addition, the vacuum tube generated a lot of heat since it required a lot of electricity and a heating filament to create electrons. The components immediately deteriorated due to the high heat, and hence burnt out quickly. Vacuum tubes also require three separate power sources, which are dependent on capacities and ratings, in order to function. With the advancement of vacuum tube technology, power consumption and size decreased. They were also cost-effective, as transistors are only effective at low frequencies. For high frequencies, a hundred transistors in parallel and linked together will be necessary with the transistors in a cascade. This necessitated the use of heat sinks, which generate a lot of heat.

An analogous transmitter utilises a single tube and requires substantially less power. It may also be programmed using either forced air or water cooling. Because the speaker dampening effect of vacuum tubes and solid-state amplifiers cannot reproduce the distinctive distortion, vacuum tubes are more commonly used in sound amplifiers. In the 1950s, the transistor began to take the role of the vacuum tube. As computing devices became smaller, transistors were much more perfect to utilise due to their size. Vacuum tubes did not fit in smaller computing machines due to their huge size, making them less functional.

Furthermore, vacuum tubes are still utilised in high-end audio equipment and large radio stations today, particularly those that employ frequencies greater than 50 MHz and energy levels greater than 10,000 W, indicating that the vacuum tube technology is not totally defunct.

The vacuum tube is an intriguing cleaning element that may be utilised for a variety of applications. These tubes primarily feature a cathode and anode in a vacuum environment. Vacuum tubes come in a variety of shapes and sizes, each with its own set of working principles.

1. Diode Vacuum Tubes:-  A diode is the most basic type of vacuum tube, with two terminals: an anode and a cathode. The thermionic effect causes electrons to transfer from the surface of the cathode when it is sufficiently heated. When the cathode is attached to the anode and has a greater electric potential, the cathode generates negatively charged electrons that are attracted to the anode. The electric currents then flow in the direction of positive charges due to convection.

2. Therefore, the flow of electrons is always considered from the cathode to the anode. The main reason behind it, the current of negative charges going in the same route is equivalent to a current of positive charges in the opposite direction. The below picture is an example of Diode vacuum tubes. As compared to the cathode terminal, when the anode has higher electric potential, the released electrons get attracted to the anode. 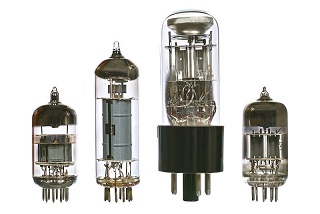 3. Triode Vacuum Tubes: A form of vacuum tube in which electric currents flow from a high potential V+. However, a valve that permits this flow to be controlled is still required. A grid is required in a triode, which acts as a third terminal between the cathode and the anode.

When the grid’s electric potential is lower than the cathode’s, the cathode generates repelled electrons that aid in locating obstacles in reaching the anode and electron transportation between the terminals. If the grid is sufficiently negative, its current is blocked, producing the same effect as closing the hydraulic circuit’s valve. An example of a Triode vacuum tube is seen in the figure below. 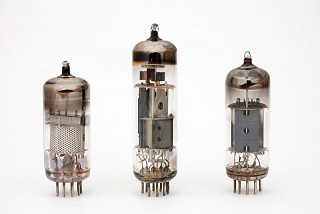 4. Tetrode Vacuum Tubes: The introduction of tetrode vacuum tubes was the fundamental motivation for the triode’s development. The tetrode has a fourth electrode called the screen between the anode and the grid. The major goal of this advanced component is to reduce the capacitance between the grid and the anode. Because the grid and anode are so near to one another, they act like a little capacitor in a triode, which can cause instability and oscillations. When compared to the cathode, if the screen has a greater voltage but a lower voltage than the anode, it reduces the grid and anode’s intrinsic capacitance by acting as an electrostatic screen between the two (grid and anode). Tetrode vacuum tubes are seen in the image below. 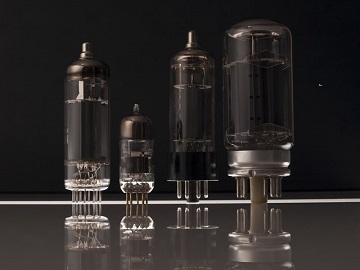 The screen at the anode is also configured to function in an ultra-linear form by delivering specific fractions of the output signal. In a tetrode, the screen is positive in relation to the cathode. As a result, some of the electrons released from the cathode that are attracted by the screen travel to the anode. As a result, the current flow through the screen will be reduced. When vacuum tubes are configured to function in ultra-linear mode or distributed load, this effect is employed. Rather of delivering a set voltage to the screen, this design is obtained by feeding back a proportion of the anode’s output signal to it.

The proportion of the needed anode output signal is sent to the screen by connecting it to the output transformer’s tap. With the right amount of anode signal, the current through the screen has a negative reaction, and the value of distortion reduces minimally, resulting in a reduction in power efficiency.

The exact electrical vacuum tubes utilised determine the acceptable proportion. In most of the known designs of power amplifiers, this ratio is fixed around 43 percent.

5. Pentode Vacuum Tubes: The pentode vacuum tubes were designed as a refinement of the tetrodes vacuum tubes. When electrons from the cathode reach the anode in this sort of vacuum tube, there is a greater likelihood that they will have enough energy to induce secondary electron emission from the anode. When secondary emission electrons reach the grid, however, they may create oscillations and instability. Pentodes require a fifth electrode, known as the suppressor, to prevent secondary emission electrons. In most cases, the suppressor is linked to its cathode directly, either by an explicit connection between the relevant pins or through a connection within the vacuum tube. The pentode vacuum tube is seen in the image below. 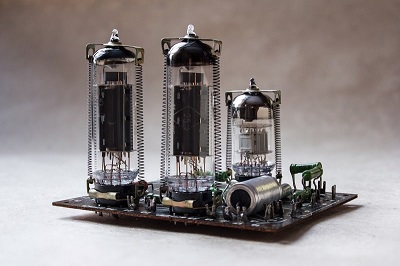 Two or more electrodes are separated by ionised gas or vacuum at low pressure in a vacuum tube or electron tube. The operation of the tube from one electrode to the next is dependent on the creation and transport of electrons. The cathode, which is generally a metallic electrode released by the cathode, is the source of the electron. The movement of the electrons released by the cathode is controlled by a magnetic field, an electric field, or both. Outside the tube, a permanent magnet or an electromagnet can create a magnetic field. The positive electrode (a plate or anode) attracts and accelerates the electron, whilst the negative electrode (cathode) repels and slows it down.

The vacuum tube, variously known as the Fleming valve, vacuum diode, thermionic valve, thermionic tube, or Kenton, was invented by English electrical engineer and scientist John Ambrose Fleming in 1904. Fleming was well-known for its contributions to electronics, but they also made significant contributions to wireless telegraphy, photometry, and electric measurements. He became a well-known professor at University College and a consultant for the Edison Electric Light Company.

He was knighted in 1929 for his contributions to the field of electrical and electronic engineering. Fleming was also an accomplished author, having published over a hundred books and articles, the most well-known of which were The Alternate Current Transformer in 1889 and The Principles of Electric Wave Telegraphy in 1906.

Despite the fact that solid-state electrical technology had supplanted Fleming’s diode, it was nevertheless utilised in radars and radio receivers for decades following. The first electronic digital computers, long-distance telephone communication, radio transmission, and television were all possible thanks to vacuum tubes in the first part of the twentieth century. Although transistors have nearly completely replaced vacuum tubes, vacuum tubes may still be found in microwave ovens, computer and television display systems, and high-frequency transmitters aboard space satellites.

Thomas Edison discovered an effect in the 1880s that was not put to good use at the time. Although this phenomena was first dubbed “Hammer’s Phantom Shadow,” it was later dubbed the “Edison Effect” after Thomas Edison developed the light bulb in 1883.

Despite the fact that the vacuum tube is an older technology, it has several advantages that are outlined below:

One of the most appealing features of a vacuum tube is its ease of replacement.

Vacuum tubes are capable of operating at high temperatures without deterioration.