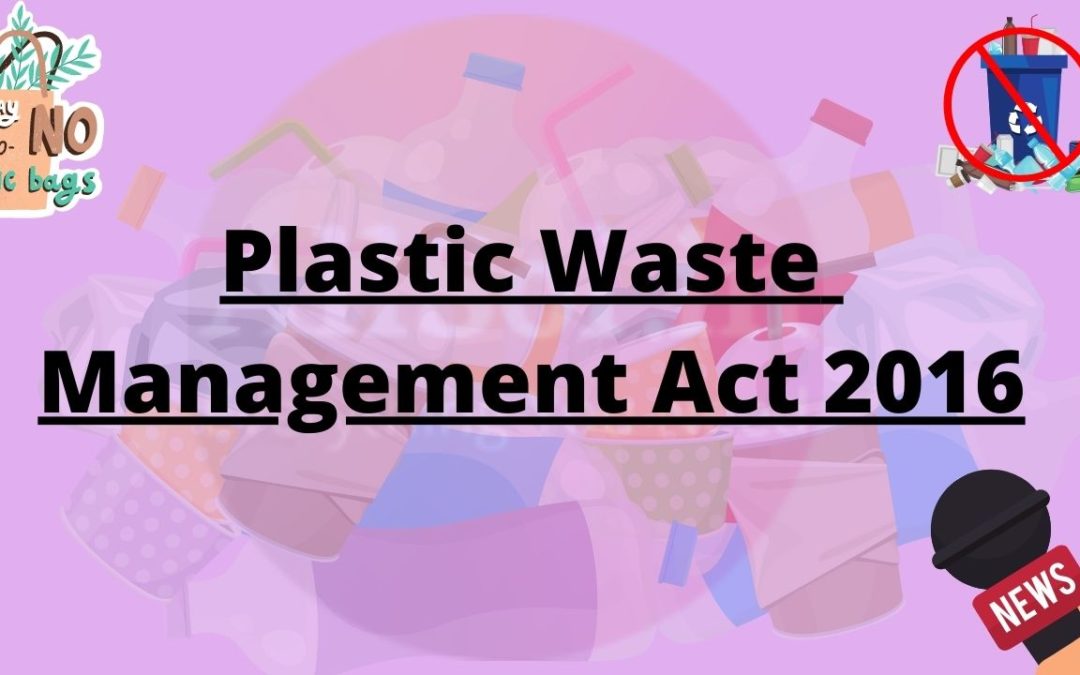 People are adviced to do the following:-

Now  Just read about it in more detailed manner…… 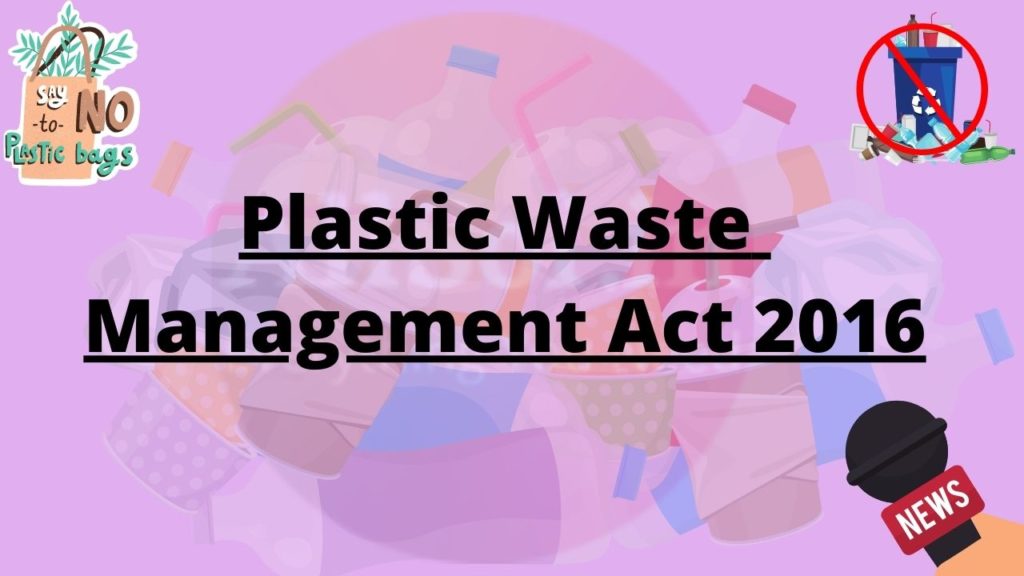 The first Plastic Waste Management Rule was issued in 2011, and it was updated in 2016. In 2014, the Swachh Bharat Mission entered the picture, as did the Subramaniam Committee at the same time. The Central Public Health and Environmental Engineering Organisation (CPHEEO) Manual on Solid Waste was revised in 2016 as part of the National Action Plan for Swachh Bharat Mission, and other items such as the Solid Waste Management Rule, Electronic Waste, Plastic Waste, Bio-Medical Waste, and Demolition Waste were also added. So, as can be observed in terms of rulemaking, our Ministry of Environment and Climate Change, in collaboration with many stakeholders, has enacted a number of different laws throughout the country. Because the focus of this post is on plastic trash, we will primarily discuss Plastic Waste Rules. This will be in provisions of the Solid Waste Rules, which also covers a small amount of hazardous waste. Additionally, dealing with plastic and bio-medical waste. All of these features of plastic have been incorporated into the Plastic Waste Management Rules, which we shall discuss in greater depth in this article.

What was the need for having separate Plastic Waste Management Rules?

Plastic has been overused in large quantities, and it is now making up a considerable amount of the waste stream. In some parts of the world, there has been a suggestion that we need a distinct set of rules focused solely on plastic since plastic is becoming a nuisance or, to put it another way, a nightmare. Plastic Waste Management Rule, not Plastic Management Rule, is the rule. So, once it enters the waste stream, it becomes a concern; plastic items are not toxic in and of themselves. Plastic is a great material since it serves numerous purposes, does not degrade, can be used in a variety of applications, and does not pollute the environment. Because it does not decay, it just breaks down into smaller bits, which end up in the river and then into the ocean. Fishes are found in oceans, and this is how they become a part of the marine ecosystem, causing environmental and human health issues.

As a result, discriminatory plastic disposal has become a huge environmental issue. Plastic carry bags, in particular, are the leading contributors to scattered garbage, with millions of bags ending up in the environment each year via soil, water bodies, and watercourses, and taking an average of 1000 years to degrade completely. As a result, plastic waste management is critical to addressing all plastic waste-related issues.

In 1999, a law called Recycled Plastic Manufacture and Usage Rules was enacted to address plastic waste. As a result, if you need to recycle plastic, make sure you do so in an environmentally friendly manner. The Plastic Waste (Management and Handling) Rules (2011) were enacted as a result of this, and for the first time, plastic waste management was considered in 2011.

Later, in 2016, the government issued The Plastic Waste Management Rules, which were really a modified version of earlier rules from 2011, but because the government wanted to review all of the rules at the same time, they set a one-year deadline, and there were undoubtedly some changes. These prior plastic waste management laws were suppressed, and they were then notified on March 18, 2016. Of course, there were some changes from 2011 to 2016, and 2016 became more thorough; a variety of stakeholders were also included in 2016, which was not the case in 2011, and this is true for other waste streams as well. For example, rural areas were included since it was previously assumed that the plastic waste problem was limited to urban areas exclusively, but the government determined, based on input, that there is a lot of plastic-related debris in the waste streams of rural areas as well. Replacement of plastic is fruitless until we have a viable alternative that can take its place, but we can ban some things instead.

The Plastic Waste Management Rules of 2016 are the most stringent anti-plastic legislation in India. The most important part of these guidelines is that plastic makers and retailers who use plastic as a primary component are legally required to implement the ‘Extended Producer Responsibility’ method of collecting back plastic waste. Because there is currently no environmentally benign alternative to plastic on the market, the country should focus on developing a system to treat plastic trash rather than debating whether or not to prohibit products or plastic altogether, which is currently not feasible in India. The following are the rules established by the government to assist in the procedure:

Pre-Registration Fee Collection: The Rules stipulate that a fee should be collected through the pre-registration process of producers, importers, and vendors of plastic carry bags and multilayered packaging, as well as vendors for selling plastic in the market, in order to assist in the establishment of a waste management system.

Waste Generators’ Responsibilities, Extended Producer Liability, and the Collect Back System: Within six months of the date of publication of the notification of these Rules, all producers, importers, and brands who have introduced plastic carry bags, multilayered plastic sachets, pouches, or packings in the market must implement a waste collection procedure to collect the plastic waste generated by them. Individuals and bulk generators such as commercial establishments, offices, industries, and event organisers must segregate plastic garbage at the source, hand it over, and pay a user charge as defined by the ULB (Urban Local Bodies) as well as a spot fine if the laws are broken. The goal of EPR is to provide funding to companies that can come up with a new way to manage plastic waste. All of these companies that sell products that cause plastic waste can be asked to pay a certain amount of money based on the volume of those products that they sell, and that money can be put into a pool of money where a company X, which specialises in waste management, can come in and help the government pool such money, resulting in better waste management rather than expecting other countries or companies to manage it.

Rather than each company trying to create its own EPR framework, the EPR aim here is to bring the diverse companies together. And it cannot be left to the companies to do it because they will never do it; instead, the government must try to put a rupee figure on it, based on their turnover, that they have put this much percentage in this kitty and that will fund plastic waste management programmes; this can be any company that has an idea whose expertise to do it can be evaluated by the technical committee by looking at the financial viability. As a result, a procedure must be in place, and that is how things will evolve in other globe streams, such as European countries and other places. Of course, it will take time, but it will be a road that is more durable and capable of achieving anything than other long-term solutions.

Using Plastic Waste: The Rules advocated increasing the use of plastic waste for road and construction, energy recovery, and garbage conversion to oil, among other things, as well as coming up with new ideas and ways to profitably utilise the waste and manage the country’s waste disposal problem.

Prohibition: The Rules also request that the thickness of carrying bags and plastic sheets be increased from 40 micron to 50 micron. This will eventually assist to reduce plastic trash since the price of plastic bags will rise in the market, and people will be hesitant to buy and sell them due to their high prices.

The Rules instruct local bodies and Gram panchayats to take responsibility for creating and organising a waste management system within their villages and communities.

Retailers, street vendors, and others that sell or give goods in plastic bags, plastic sheets, multilayered packaging, or plastic covers that have not been manufactured, tagged, or labelled according to these rules will be fined.

Reuse of plastic waste: The plastic trash that is generated should be handled and re-used by utilising various applications that will aid in the plastic recycling process.

There was category pricing on carry bags under the Plastic Waste Management Rules 2016, however this was removed with the help of an amendment issued earlier that year. This amendment also established a centralised registration system, which took into account the ease of doing business for producers, recyclers, and manufacturers by introducing an automatic registration process.

The 2016 Plastic Waste Management Rules are designed to:

To extend the application of the concept from urban to rural locations, as plastic garbage has made its way into rural places.

Introduce the role of producers and generators in acting responsibly toward the waste management system, as well as the collect back system for plastic waste by various brands, producers, and owners in accordance with the extended producers’ responsibility system brought to light through these rules.

It also promoted the use of plastic in road construction, as per the Indian Road Congress’s rules, as well as energy recovery and waste to oil conversion. A better use of the waste generated.

There has been an endeavour to develop and improve the plastic waste management system rather than placing a blanket ban on plastic products because no good eco-friendly alternative to plastic has yet been found that can replace plastic in India.

Despite the implementation of the Plastic Waste Management Rules in 2016 and subsequent changes two years later, many towns and localities are still unable to accomplish the goals set forth in the rules for a variety of reasons. Even after receiving assistance to deal with the distressing burden of plastic waste, the largest municipal corporations have been unable to properly instrument waste segregation, such as collecting recyclable plastic, non-recyclable plastic, and other waste that must be processed by different companies’ material recovery facilities. As a result of the refusal to report the full magnitude of plastic garbage, there is an increase in problem.

According to data from the Federation of Indian Chambers of Commerce and Industry, per capita plastic use has increased significantly from 11 kg in 2014-15 to 20 kg by 2020, with a 43 percent increase in the use of single-use packaging with low recovery rates. In 2018, the Plastic Waste Management Rules were amended, introducing a six-month deadline for producers to plan for waste recovery solutions in collaboration with the State Urban Developments, which has demonstrated some positive progress. There has been no usage of number symbols to label the plastic, such as 1 for PET, 4 for Low-density Polyethylene, 5 for Polypropylene, and so on, to ensure that the plastic trash is recycled using the proper industrial procedure.

Because of recycling, there has been a noticeable decrease in the volume of non-recyclables that must be disposed of utilising processes such as plasma pyrolysis, co-processing in cement kilns, or landfilling. The Central Pollution Control Board (CPCB) sent notices to a total of 52 companies, requesting that they detail their intentions to meet their extended producer responsibility obligations.

The laws for managing plastic garbage have been changed, but this is still a work in progress. Things were not done merely in 2016, and the government should endeavour to adopt laws and regulations to improve management. Again, we have one of the harshest standards in the world, but implementation is still poor, especially in the plastic waste sector, as we witnessed in the United States, and in other areas. We still have to handle the infrastructure in this type of waste stream, which does not exist yet. Although some work is being done in bits and pieces here and there, we still lack a lot of infrastructure to support these rules in general. We must concentrate our efforts on reforming the plastic waste management system.