Question:- 1. Who discovered cells, and how?

Answer:- In 1665, Robert Hooke used a self-designed microscope to examine a small slice of cork and discovered cells. He noticed that the cork had the structure of a honey comb, with many small compartments. He named these small boxes cells.

Question:- 2. Why is the cell called the structural and functional unit of life?

Answer:- A cell is capable of carrying out all of life’s essential functions on its own. As a result, they are called to as the basic or functional unit of life.

Question:- 1. How do substances like CO2 and water move in and out of the cell? Discuss.

Question:- 2. Why is the plasma membrane called a selectively permeable membrane?

Answer:- Plasma membrane is called a selectively permeable membrane since it only permits some particular chemicals to enter and exit from the cell.

Question:- 1. Fill in the gaps in the following table illustrating differences between prokaryotic and eukaryotic cells.

Question:- 1. Can you name the two organelles we have studied that contain their own genetic material?

Answer:-  Mitochondria and Plastids have their own genetic material.

Question:- 2. If the organisation of a cell is destroyed due to some physical or chemical influence, what will happen?

Answer:- If a cell’s organisation is destroyed by physical or chemical forces, the cell will be unable to conduct basic functions such as breathing, feeding, and excretion. This could put an end to all of the life activity and cause it to die.

Question:- 3. Why are lysosomes known as suicide bags?

Answer:- Lysosomes may burst when a cell is damaged and resurrection is not possible, and the enzymes digest their own cell. As a result, lysosomes are referred to as “suicide bags.”

Question:- 4. Where are proteins synthesised inside the cell?

Answer:- Ribosomes are responsible for protein synthesis in cells. As a result, ribosomes are also known as protein factories. Ribosomes are particles associated with the rough endoplasmic reticulum.

Question:- 1. Make a comparison and write down ways in which plant cells are different from animal cells.

Question:- 3. What would happen if the plasma membrane ruptures or breaks down?

Answer:- The cell will not be able to exchange material from its surroundings through diffusion or osmosis if the plasma membrane ruptures or breaks. After that, the protoplasmic substance will disappear and the cell will die.

Question:- 4. What would happen to the life of a cell if there was no Golgi apparatus?

Question:- 5. Which organelle is known as the powerhouse of the cell? Why?

Answer:- Mitochondria are considered as the cell’s powerhouse. It does so because it releases the energy essential for various life functions. mitochondrial energy is released in the form of ATP (adenosine triphosphate) molecules, which are necessary for numerous chemical actions required for life.

Question:- 6. Where do the lipids and proteins constituting the cell membrane get synthesised?

Question:- 7. How does an Amoeba obtain its food? 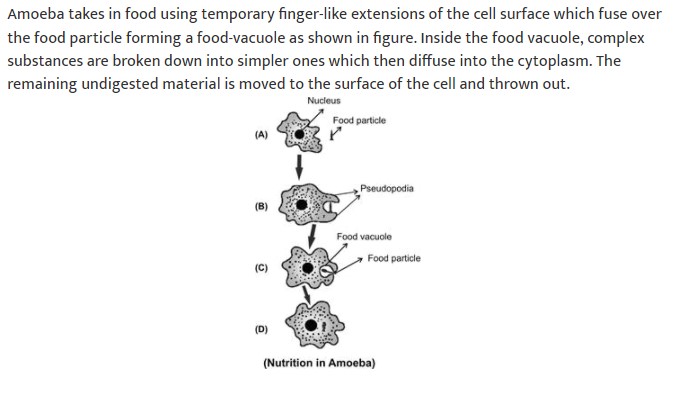 Question:- 8. What is osmosis?

Answer:- Osmosis is the process by which water molecules pass across a semipermeable membrane from an area of high concentration to a region of low concentration.

Question:- 9. Carry out the following osmosis experiment: Take four peeled potato halves and scoos each one out to make potato cups. One of these potato cups should be made from a boiled potato. Put each potato cup in a trough containing water. Now,

(a) Keep cup A empty

(b) Put one teaspoon sugar in cup B

Keep these for two hours. Then observe the four potato cups and answer the following:

(i) Explain why water gathers in the hollowed portion of B and C.

(ii) Why is potato A necessary for this experiment?

(iii) Explain why water does not gather in the hollowed out portions of A and D.

Answer:- (i) Water collects in B and C because the concentration of water in the trough and water in the Potato cup differs in both cases. As a result of the potato cells acting as a semi-permeable membrane, osmosis occurs.

(ii) Potato A is required for comparison and serves as a control in this experiment.

(iii) The hollowed-out sections of A and D do not collect water. Because the concentration in cup A does not vary, water does not flow. One of the concentrations must be higher than the other for osmosis to occur.

Because the cells in cup D are dead, there is no semi-permeable barrier for water to flow through, and no osmosis occurs.

Question:- 10. Which type of cell division is required for growth and repair of body and which type is involved in formation of gametes?

Answer:- A cell can divide in one of two ways: