Question:- 1. In a reaction, 5.3 g of sodium carbonate reacted with 6 g of acetic acid. The products were 2.2 g of carbon dioxide, 0.9 g water and 8.2 g of sodium Q acetate. Show that these observations are in agreement with the law of conservation of mass.

Question:- 2. Hydrogen and oxygen combine in the ratio of 1:8 by mass to form water. What mass of oxygen gas would be required to react completely with 3 g of hydrogen gas?

Therefore 24 g of oxygen gas would be required to react completely with 3 g of hydrogen gas.

Question:- 3. Which postulate of Dalton’s atomic theory is the result of the law of conservation of mass?

Answer:- “Atoms are indivisible particles, which cannot be created or destroyed in a chemical reaction”.

Question:- 4. Which postulate of Dalton’s atomic theory can explain the law of definite proportions?

Answer:- “The relative number and kinds of atoms are constant in a given compound”.

Answer:-  An atomic mass unit is a unit of mass used to express atomic and molecular weights, equal to one twelfth of the mass of an atom of carbon-12.

Question:- 2. Why is it not possible to see an atom with naked eyes?

Question:- 1. Write down the formulae of

Question:- 2. Write down the names of Q compounds represented by the following formulae:-

Question:- 3. What is meant by the term chemical formula?

Question:- 4. How many atoms are present in a

(i) H2S molecule and

Answer:- (i) Total 3 atoms (2 atoms of hydrogen and 1 atom of sulphur ) are present in H2S molecule

The formula unit mass of Na2O

The formula unit mass of K2CO3

Question:- 1. If one mole of carbon atoms weighs 12 grams, what is the mass (in grams) of 1 atom of carbon? 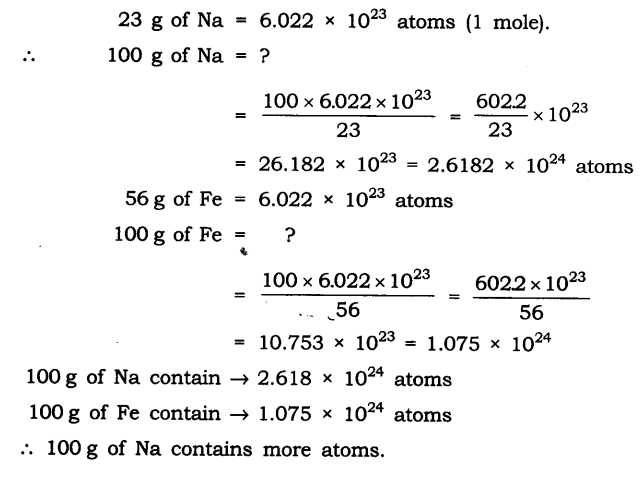 Question:- 1. A 0.24 g sample of compound of oxygen and boron was found by analysis to contain 0.096 g of boron and 0.144 g of oxygen. Calculate the percentage composition of the compound by weight.

Then also in this case, only 11 g of carbon dioxide will be formed.

The law of constant proportions will govern our answer.

Question:- 3. What are polyatomic ions? Give examples.

Question:- 4. Write the chemical formulae of the following.

Question:- 5. Give the names of the elements present in the following  compounds.

Question:- 6. Calculate the molar mass of the following substances.

Number of moles = Mass given / molar mass of water

Question:- 10. Calculate the number of molecules of sulphur (S8 ) present in 16 g of solid sulphur.

Number of moles = mass given/ molar mass of sulphur

To calculate the number of molecules of sulphur in 16g of solid sulphur:

Question:- 11. Calculate the number of aluminium ions present in 0.051 g of aluminium oxide. (Hint: The mass of an ion is the same as that of an atom of the same element. Atomic mass of Al = 27 u)