Question 1. Choose the right answer from the four alternatives given below.

(iii) The western coastal strip, south of Goa is referred to as

(iv) The highest peak in the Eastern Ghats is

(i) What are tectonic plates?

Answer:- The crust (upper part) of the earth has been formed out of seven major and some minor plates known as tectonic plates or Lithosphere plates. The moment of tectonic plates has been responsible for changing the position and size of continents for millions of years.

(ii) Which continents of today were part of the Gondwana land?

Answer:- The Gondwana land included India, Australia, South Africa, South America and Antarctica as one single land mass in past.

(iii) What is the bhabar?

Answer:- The rivers, after descending from the mountains deposit pebbles in a narrow belt of about 8 to 16 km in width lying parallel to the slopes of the Shiwaliks. It is known as bhabar.

(iv) Name the three major divisions of the Himalayas from north to south.

Answer:- The three major divisions of the Himalayas from north to south are –

(v) Which plateau lies between the Aravali and the Vindhyan ranges?

Answer:- Malwa plateau lies between the Aravali and the Vindhyan ranges

(vi) Name the island group of India having coral origin.

Answer:- Lakshadweep Islands is the island group of India having coral origin.

(i) Converging and diverging tectonic plates

Question 4. Describe how the Himalayas were formed.

Answer:- The Himalayas resulted from the collision of the convergent Indian and Eurasian tectonic plates. The northern margin of the Indian plate got pushed under the Eurasian plate which was lifted creating the lofty Himalayas and Tibetan plateau. The Himalayas were uplifted from the Tethys which was an accumulation of sedimentary rock in geosynclines.

Question 5. Which are the major physiographic divisions of India? Contrast the relief of the Himalayan region with that of the Peninsular plateau.

Answer:-  The major physiographic divisions of India are:- 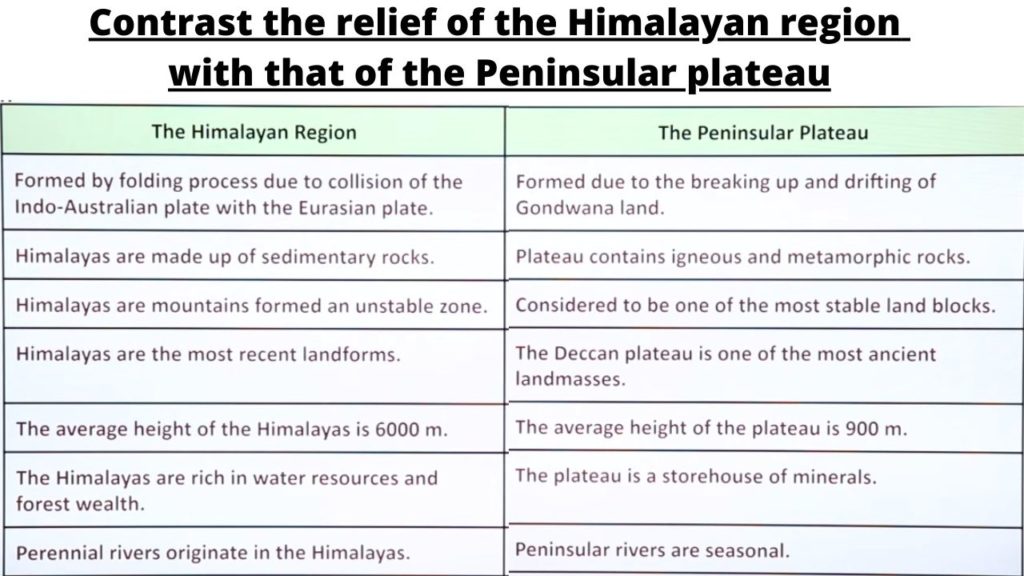 Question 6. Give an account of the Northern Plains of India.

Answer:- The northern plain has been formed by the interplay of the three major river systems the Indus, the Ganga and the Brahmaputra along with their tributaries.The deposition of alluvium soil in a vast basin over millions of years, formed this fertile plain. It spreads over an area of 7 lakh sq. km. The plain is about 2400 Km long and 240 to 320 Km broad. It is a densely populated physiographic division because of the rich soil cover, adequate water supply and favourable climate. it is agriculturally a most productive part of India.

Due to the deposition of silt the rivers in their lower course split into numerous channels known as distributaries. The Northern Plain is broadly divided into the three mentioned sections – Punjab Plains which is the Western part of it Formed by the Indus. The Indus and its tributaries.The Jhelum, the Chenab, the Ravi, the Beas and the Satluj originate in the Himalaya. This section of the plain is dominated by the doabs.

(i) The Indian Desert

Answer:- The Indian desest is an undulating sandy plain covered with sand dunes that lies towards the western margins of the Aravali Hills. It receives very  below 150 mm rainfall per year. It has arid climate with low vegetation cover. During the rainy season small streams appear, but because of lack of enough water  they disappear very quickly. Luni is the only large river in this region. Crescent shaped dunes known as Barchans cover larger areas but longitudinal dunes become more prominent near the Indo-Pakistan boundary.

Answer:- The part of the Peninsular plateau lying to the north of the Narmada river covering a major area of the Malwa plateau is known as the Central Highlands. It is wider in the west but narrower in the east. The extend of Central Highlands is from Vindhyan ranges to Aravali hills. The slope of central highlands is from southwest to northeast and hence flow of the rivers draining this region, namely the Chambal, the Sind, the Betwa and Ken is from southwest to northeast.

(iii) The Island groups of India