1. Every village in India is surveyed once in ten years during the Census and some of details are presented in the following format. Fill up the following based on information on Palampur. 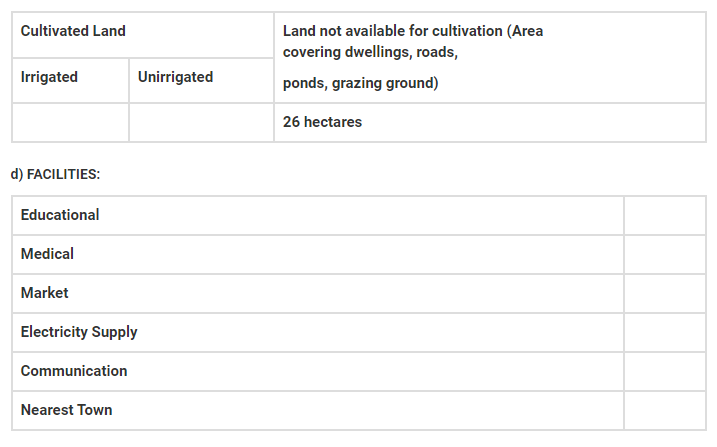 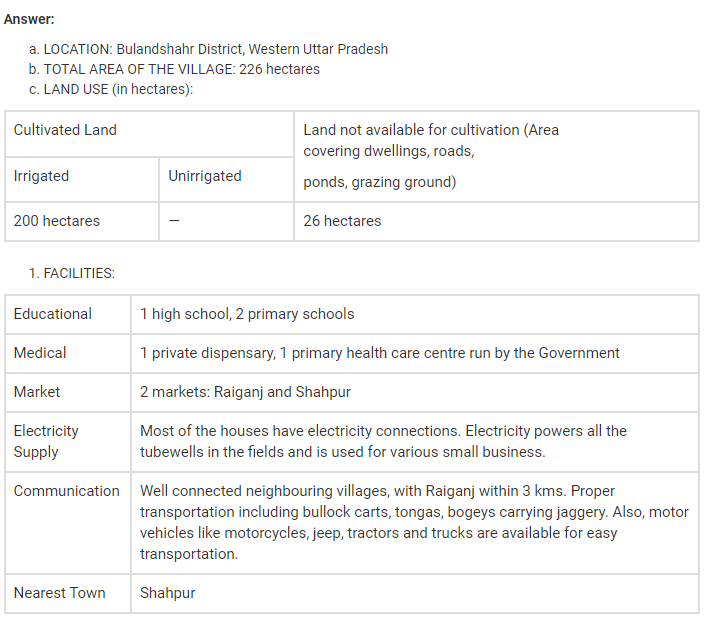 Answer:-  The spread of electricity help farmers in Palampur a lot because earlier they used to irrigate their field by using the Persian wheels which later were replaced by electric-run tubewells. So now in less efforts they can irrigate much larger areas of land more effectively.

Answer:-  Yes it is very important to increase the area under irrigation because out of total cultivated land area in the country Irrigation facilities are available only to about 40%. Rest 60% are still depends upon good monsoon and rainfall. So if with the help of modern technique we provide them good water supply then we can expect good cultivation and better style life for them.

The table distribution of land among the 450 families of Palampur is as given below:

Answer:- The minimum wages for a farm labourer set by the government in Palampur is Rs 115 (April, 2011) per day, but labours gets only Rs 80. Because there is heavy competition for work among the farm labourers in Palampur, so people agree to work for lower wages.

Answer:-  The different ways of increasing production on the same piece of land are following:-

Answer:-   A farmer with 1 hectare of land is a small farmer. He has to work in his own field for better production as well as to work in others fields too for money. He has to save some produce for his and his family consumption as well as for selling in the market. For financial need he has to borrow from big landlords who charges unfair interest from him.

Answer:-  The medium and large farmers obtain capital for farming from their previous year savings. They got big savings from either selling surplus produce of their fields or from unfair interest from others. Whereas the small farmers have to borrow from big landlords who charges unfair interest from them.

Answer:-  Tejpal Singh agrees to give Savita the loan at an interest rate of 24 per cent for four months, which is a very high interest rate. Savita also has to promise to work on his field as a farm labourer during the harvest season at Rs 35 per day. Definitely her condition would be different if she could get a loan from the bank at a low rate of interest. Because then she will not have to work for less pay. With that interest rate would also be lower.

Answer:-  Do it yourself.

Answer:- The non-farm production activities taking place in our region are:-

Answer:- Following things can be done so that more non-farm production activities can be started in villages:-