Question 1. What are the advantages of using CNG and LPG as fuels?

Answer:-  The advantages of using CNG and LPG as fuels are following:-

Question 2. Name the petroleum product used for surfacing of roads.

Answer:- The petroleum product used for surfacing of roads is Bitumen.

Question 3. Describe how coal is formed from dead vegetation. What is this process called?

Answer:-  Millions of years ago, due to natural processes like flooding, earthquake, etc trees, plants, ferns and forests got buried below the rocks, soil and sand .  As more soil deposited over them, gradually they were compressed. As a result, there was a lot of pressure and heat. These conditions, along with anaerobic conditions, turned wood’s carbon-rich organic matter into coal.

This whole process of formation of coal from dead vegetation like wood is known as carbonization.

Question 4. Fill in the blanks.

(b) Process of separation of different constituents from petroleum is called _____________.

Answer:- (a) Fossil fuels are Coal, Petroleum, and natural gas.

(a) Fossil fuels can be made in the laboratory. (T/F)

(b) CNG is more polluting fuel than petrol. (T/F)

(d) Coal tar is a mixture of various substances. (T/F)

Answer:-  Millions of years are required for the formation of fossil fuels. To produce fossil fuels from dead plants and animals buried deep inside the earth, enormous temperatures and pressure are required, which cannot be achieved in a laboratory. As a result, fossils are scarce. Hence they are consider as are exhaustible natural resources.

Question 8. Explain the process of formation of petroleum.

Answer:–  Thousands of years ago, marine animals and vegetation died and sank to the ocean’s depths. These dead organisms were turned into petroleum and natural gas because to a lack of oxygen, high temperature, and high pressure.

Question 9. The following Table shows the total power shortage in India from 1991–1997. Show the data in the form of a graph. Plot shortage percentage for the years on the Y-axis and the year on the X-axis. 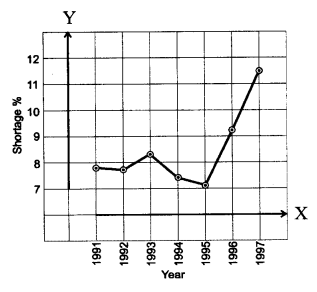