Question 1. Explain why some fibres are called synthetic.

Answer :- Some fibres are called synthetic fibres because they are made by man using different kinds of chemicals.

Rayon is different from synthetic fibres because

(a) it has a silk-like appearance.

(b) it is obtained from wood pulp.

(c) its fibres can also be woven like those of natural fibres.

Answer :- (b) it is obtained from wood pulp.

Question 3. Fill in the blanks with appropriate words.

(a) Synthetic fibres are also called man made or artificial fibres.

(b) Synthetic fibres are synthesised from raw material called petrochemicals.

(c) Like synthetic fibres, plastic is also a polymer .

Question 4. Give examples which indicate that nylon fibres are very strong.

Answer :- Following are the few examples which indicate that nylon fibre are very strong:-

1.    Nylon is used to make rock climbing parachutes and ropes.

2.    Seat belts, fishing nets, and tyre cords are all made of nylon.

3.    Nylon is used to make sporting equipment such as rackets.

Question 5. Explain why plastic containers are favoured for storing food.

Answer :- Because of the following reasons plastic containers are favoured for storing food :-

(i) They do not react with the food stored in them.

(ii) They are lightweight as well as strong.

(iii) they are safe and easy to handle.

Question 6. Explain the difference between thermoplastic and thermosetting plastics.

Question 7. Explain why the following are made of thermosetting plastics.

Answer :-  (a) Since, thermosetting plastics are insulator and do not heat up during cooking, they are used for making saucepan handles.

b) Bakelite is a type of thermosetting plastic they are bad conductor of heat and electricity. Because of this  feature it is used for making electric plugs, switches, plug boards, etc.

Question 9. Rana wants to buy shirts for summer. Should he buy cotton shirts or shirts made from synthetic material? Advise Rana, giving your reason.

Answer :-  Rana should buy a cotton shirt rather than a synthetic shirt for the summer. Cotton is a good water absorbent. So it can absorb the sweat coming out of the body.

Question 10. Give examples to show that plastics are noncorrosive in nature.

Answer :-  The meaning of non-corrosive is  not having the power to corrode by chemical action. Following examples show that plastics are non-corrosive in nature.

Question 11. Should the handle and bristles of a tooth brush be made of the same material? Explain your answer.

Answer :-  handle and bristles of a tooth brush should not be made of the same material, as the handle should be hard and strong so that it can give a firm grip while the bristle should be soft and flexible  so that it does not harm the gums.

Question 12. ‘Avoid plastics as far as possible’. Comment on this advice.

Answer :- Plastics must be avoided to the greatest extent possible. Plastic-based materials are non-biodegradable. Plastics have a negative impact on the environment. When plastics are burned, a large amount of harmful vapours are released into the environment, resulting in air pollution. When animals (such as cows) eat these plastic material, their respiratory systems become clogged. These animals may die as a result of this. Waste plastic products thrown around carelessly end up in filthy water drains and sewers, blocking them. Plastics, in a short, might be regarded a hazard to the environment.

Question 13. Match the terms of column A correctly with the phrases given in column B.

Answer :- We utilize only chemical substances and no natural materials to make synthetic fibres, which helps to conserve forests. Because the raw materials for making them don’t have to be derived from the plants

Question 15. Describe an activity to show that thermoplastic is a poor conductor of electricity.

Answer :- Arrange a circuit as shown in the diagram. Leave a space between the wire’s two ends. Fill the gap with a thermoplastic. Keep an eye on the light bulb.The bulb does not glow. This demonstrates that thermoplastic is a poor electrical conductor. 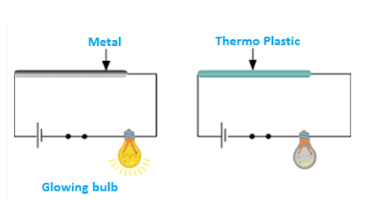