(a) Microorganisms can be seen with the help of a Microscope.

(c) Alcohol is produced with the help of Sugar.

(d) Cholera is caused by Bacteria.

(a) Yeast is used in the production of

(b) The following is an antibiotic

(c) Carrier of malaria-causing protozoan is

(d) The most common carrier of communicable diseases is

(e) The bread or idli dough rises because of

(f) The process of conversion of sugar into alcohol is called

3. Match the organisms in Column A with their action in Column B. 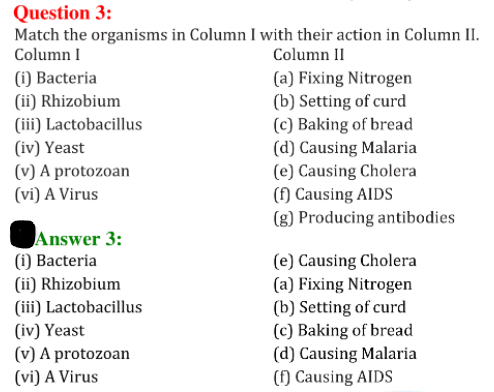 4. Can microorganisms be seen with the naked eye? If not, how can they be seen?

Answer:- Microorganisms cannot be seen by the naked eye because they are very small in size. They can be seen by using a microscope only.

5. What are the major groups of microorganisms?

6. Name the microorganisms which can fix atmospheric nitrogen in the soil.

7. Write 10 lines on the usefulness of microorganisms in our lives

8. Write a short paragraph on the harmful effects of microorganisms.

Answer:- The medicines that kill or stop the growth of the disease-causing microorganisms are medicines called antibiotics.

The precautions must be taken while taking antibiotics are following:-