(c) If you pass current through copper sulphate solution, copper gets deposited on the plate connected to the terminal ______________ of the battery.

(d) The process of depositing a layer of any desired metal on another material by means of electricity is called______________  .

(a) Most liquids that conduct electricity are solutions of acids, bases and salts.

(b) The passage of an electric current through a solution causes chemical effects.

(c) If you pass current through copper sulphate solution, copper gets deposited on the plate connected to the terminal negative of the battery.

(d) The process of depositing a layer of any desired metal on another material by means of electricity is called electroplating.

Question:- 2. When the free ends of a tester are dipped into a solution, the magnetic needle shows deflection. Can you explain the reason?

Answer:- The magnetic needle deflection indicates that the circuit is complete and that the solution conducts electricity, indicating that it is a good conductor.

Question:- 3. Name three liquids, which when tested in the manner shown in Fig.14.9, may cause the magnetic needle to deflect. 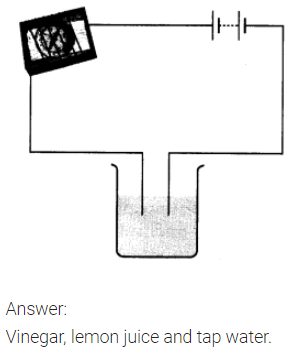 Question:- 4. The bulb does not glow in the setup shown in Fig.14.10. List the possible reasons. Explain your answer. 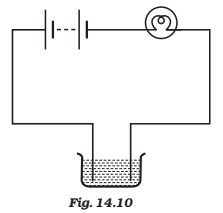 Answer:-  The bulb may not glow because of the following reasons:

(i)  May be the wires in the circuit are loosely connected.

(iv)   May be the liquid used here is a poor conductor of electricity.

Question:- 5. A tester is used to check the conduction of electricity through two liquids, labelled A and B. It is found that the bulb of the tester glows brightly for liquid A while it glows very dimly for liquid B. You would conclude that

(i) liquid A is a better conductor than liquid B.

(ii) liquid B is a better conductor than liquid A.

(iii) both liquids are equally conducting.

(iv) conducting properties of liquid cannot be compared in this manner.

Answer:- (i) liquid A is a better conductor than liquid B.

Question:- 6. Does pure water conduct electricity? If not, what can we do to make it conducting?

Answer:- Pure water does not conduct electricity as it does not have any type of salts in it. A tiny quantity of common salt (Sodium Chloride, or NaCl) can be added to the water to convert it into a conducting medium.

Question:- 7. In case of a fire, before the firemen use the water hoses, they shut off the main electrical supply for the area. Explain why they do this.

Answer:- The water used in the water hoses is not pure water and hence is a good conductor of electricity. So, the firemen turned off the electric supply before spraying water to protect themselves and others from electric current

Question:- 8. A child staying in a coastal region tests the drinking water and also the seawater with his tester. He finds that the compass needle deflects more in the case of seawater. Can you explain the reason?

Question:- 9. Is it safe for the electrician to carry out electrical repairs outdoors during heavy downpour? Explain.

Answer:- No, it is not safe to carry out the electrical repairs outdoors during the heavy downpour. It can cause severely injure by electric shock or electrocution, as rain water is a good conductor of electricity.

Question:- 10. Paheli had heard that rainwater is as good as distilled water. So she collected some rainwater in a clean glass tumbler and tested it using a tester. To her surprise she found that the compass needle showed deflection. What could be the reasons?

Answer:- Rainwater is  is an insulator as it is pure water. But it gets mixed with air pollutants like sulphur dioxide and nitrogen oxides and form acidic solution, before falling on earth surface, which made it a good conductor of electricity. So, the compass needle showed deflection.

Question:- 11. Prepare a list of objects around you that are electroplated.

Answer:- Objects around us that are electroplated are door’s handles, taps, cycles’s rims , showers, the handlebar of cycles and bikes, burner of gas, tin cans, metallic almirahs, belts’s buckles, etc.

Question:- 12. The process that you saw in Activity 14.7 is used for purification of copper. A thin plate of pure copper and a thick rod of impure copper are used as electrodes. Copper from impure rod is sought to be transfered to the thin copper plate. Which electrode should be attached to the positive terminal of the battery and why?