Question:- 1. What is the term used for chemical secretions of endocrine glands responsible for changes taking place in the body?

Answer:-  Adolescence is the stage of life when the body experiences changes that lead to reproductive maturity. Adolescence lasts between 11 and 19 years on average.

Question:- 3. What is menstruation? Explain.

Answer:-  With the start of adolescence (10 to 12 years of age) in females, the ova or eggs begin to mature. One egg matures and is released by one of the ovaries once every 28 to 30 days. The uterine wall thickens at this time in order to receive the fertilised egg. If it is fertilised, it will begin to grow. This leads to a pregnancy. If fertilisation does not occur, the ovum or released egg, as well as the thicker uterine lining and its blood vessels, are lost. Women experience bleeding as a result of this. This is called menstruation. It happens every 28 to 30 days.

Question:- 4. List changes in the body that take place at puberty.

Answer:-  The changes that take place in the body at the time of puberty are as follows:-

Question:- 5. Prepare a Table having two columns depicting names of endocrine glands and hormones secreted by them.

Question:- 6. What are sex hormones? Why are they named so? State their function.

Answer:- Sex hormones are hormones that help and control the development of secondary sexual characteristics. They’re called so because they regulate sexual activity and help us to distinguish boys from girls.

The functions of sex hormones are listed separately below:

Testosterone :- Male sex hormone (MSH) is a hormone that is produced by males It’s also known as testosterone. It is produced by the testes and induces secondary sexual character changes in boys, such as the growth of facial hair such as a moustache or beard.

Estrogen :- Estrogen is another name for female sex hormone. It is released by the ovaries and regulates secondary sexual characteristics in females, as well as the formation of mammary glands, among other things. It also keeps the pregnancy going.

(a) Adolescents should be careful about what they eat, because

(i) proper diet develops their brains.

(ii) proper diet is needed for the rapid growth taking place in their body.

Answer:- (ii) proper diet is needed for the rapid growth taking place in their body.

(b) Reproductive age in women starts when their

(c) The right meal for adolescents consists of

Answer:-  (a) Adam’s apple:   The voice box in boys swells from the upper region of the neck, just below the chin, and is known as Adam’s apple. The vocal chord thickens and elongates as a result the voice of males become harsh.  On the other hand, females have a tiny larynx that is hardly noticeable. As a result, girls have a high pitched voice.

Answer:-  The sex chromosomes in humans are the X and Y chromosomes. Females  Ovum always have an X chromosome, but male sperm might have either an X or a Y chromosome. When an X-chromosome-carrying sperm fertilises an egg, the zygote develops into a female kid with two X chromosomes and vice versa.

Question:- 9. Word game : Use the clues to work out the words. 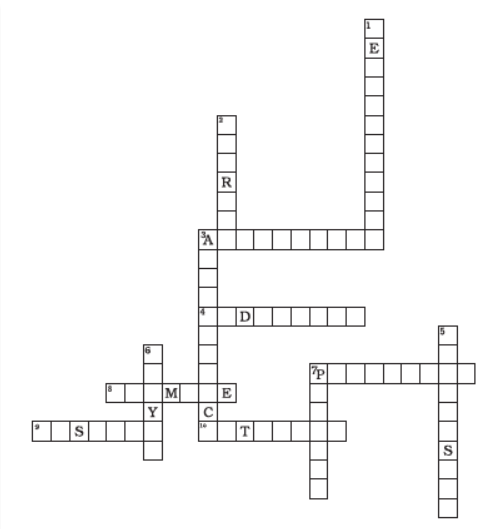 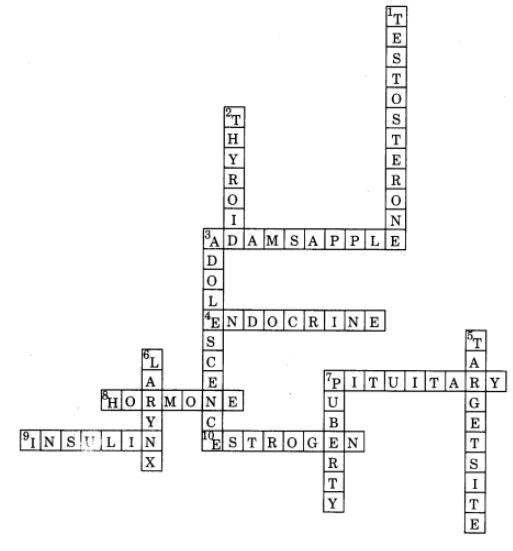