(a) The freshwater stored in the ground is much more than that present in the rivers and lakes of the world. (T/F)

(b) Water shortage is a problem faced only by people living in rural areas. (T/F)

(c) Water from rivers is the only source for irrigation in the fields. (T/F)

(d) Rain is the ultimate source of water. (T/F)

(a) The freshwater stored in the ground is much more than that present in the rivers and lakes of the world.   ( True )

(b) Water shortage is a problem faced only by people living in rural areas. ( False )

(c) Water from rivers is the only source for irrigation in the fields. ( False )

Question:- 2. Explain how groundwater is recharged?

Answer:- Rainwater and water from other sources such as rivers and ponds seep into the soil, filling the voids and cracks deep beneath the surface.The process of water seeping into the earth is called infiltration.  As a result of this process, the groundwater is recharged.

Question:- 3. There are ten tubewells in a lane of fifty houses. What could be the long term impact on the water table?

Answer:- The groundwater will be utilised for household purposes if ten tube-wells are built in a lane of fifty houses. As a result, groundwater levels will be depleted, and the water table will fall.

Question:- 4. You have been asked to maintain a garden. How will you minimise the use of water?

Answer:- Drip irrigation  method allows water to reach the plant’s roots one drop at a time and reduce water wastage. By using drip irrigation, we may reduce the amount of water we need for gardening.

Question:- 5. Explain the factors responsible for the depletion of water table.

Answer:- The following are some of the variables that contribute to the depletion of the water table:

(ii) Developing industries:- Water is required by all sectors. As the human population grows, so does the number of companies, resulting in a significant increase in water usage.

Question:- 6. Fill in the blanks with the appropriate answers:

Answer:- (a) People obtain groundwater through well and hand pumps.

(b) Three forms of water are ice, water and vapour.

(c) The water bearing layer of the earth is Hydrosphere.

(d) The process of water seepage into the ground is called infiltration.

Question:- 7. Which one of the following is not responsible for water shortage?

(i) Rapid growth of industries

(i) in the lakes and rivers of the world remains constant.

(ii) under the ground remains constant.

(iii) in the seas and oceans of the world remains constant.

(iv) of the world remains constant. 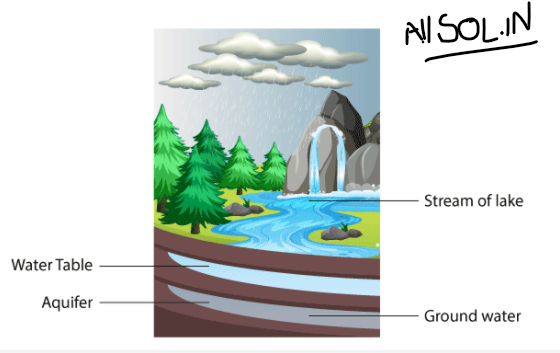