Question 1. Why do organisms take food?

Answer:- All organism need to take food to get energy for their growth, development and maintenance.

Question 2. Distinguish between a parasite and a saprotroph.

Question 3. How would you test the presence of starch in leaves?

Answer:- Iodine testing can be used to determine whether or not leaves contain starch. Add two drops of iodine solution to the leaf, the colour changes to blue, indicating the presence of starch.

Question 4. Give a brief description of the process of synthesis of food in green plants.

Answer:-  Chlorophyll is found in the leaves of green plants. In the presence of sunlight, the leaves produce food using CO2 and water.

Question 5. Show with the help of a sketch that plants are the ultimate source of food.

Answer:- Every living being on this eart is directly or indirectly depends on plants for their food requirements. For example herbivores eat plants and its products directly whereas carniovores eats plant eaters. Thus the following sketch shows that the plants are the ultimate source of food. 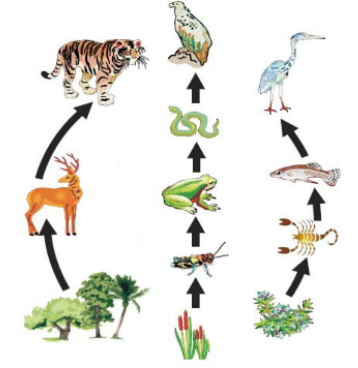 Question 6. Fill in the blanks:

(a) Green plants are called autotrophs since they synthesise their own food.

(b) The food synthesised by plants is stored as starch.

(c) In photosynthesis solar energy is absorbed by the pigment called chlorophyll.

(i) A parasitic plant with yellow, slender and branched stem.

(ii) A plant that is partially autotrophic.

(iii) The pores through which leaves exchange gases.

(a) Cuscuta is an example of:

(b) The plant which traps and feeds on insects is:

Question  9. Match the items given in Column I with those in Column II:

(i) Carbon dioxide is released during photosynthesis. (T/F)

(ii) Plants which synthesise their food are called saprotrophs. (T/F)

(iii) The product of photosynthesis is not a protein. (T/F)

Question  11. Choose the correct option from the following:

Which part of the plant takes in carbon dioxide from the air for photosynthesis?

Question  12. Choose the correct option from the following:

Plants take carbon dioxide from the atmosphere mainly through their:

Question  13. Why do farmers grow many fruits and vegetable crops inside large green houses? What are the advantages to the farmers?

Answer:- Green house provide favourable climatic conditions like suitable temperature for these crops. Advantages to farmers while growing fruits and vegetable crops inside greenhouses are:-