(i) to protect the ship when rough weather began.

(ii) to check the flooding of the water in the ship.

Answer:-  (i) When bad weather started, the captain decided to slow the ship down to safeguard the ship. The strong mooring line was tied in a loop over the stem and the storm jib was dropped. Everything was double-fastened, and the life-raft drill was completed.

(ii) To prevent the ship from flooding, he placed watertight hatch covers over the gaping holes, diverting the water to the side. He located another electric pump, linked it to an outpipe, and began it when the two hands pumps became blocked and the electric pump shorted.

Question 2. Describe the mental condition of the voyagers on 4 and 5 January.

Answer:-  The voyagers were relieved on January 4th after pumping water continuously for 36 hours. They ate for the first time in two days. Their relief was short. They were in a hazardous scenario on January 5th. They appeared to be scared of death, and they were under a lot of mental stress.

Question 3. Describe the shifts in the narration of the events as indicated in the three sections of the text. Give a subtitle to each section.

Answer:-  The first section describes a smooth travel from Plymouth, England, to Cape Town, South Africa, 3500 kilometres east. The narrator is self-assured and at ease. As the weather worsened, they were faced huge waves. They took preventive precautions to save themselves and battled the tragedy. The narration grows depressing, but it communicates confidence, bravery, and a strong willpower. By the morning of January 6th, the Wave Walkers had ridden clear of the storm and were able to see the Ile Amsterdam Island. The storyteller is now at ease. There’s a sense of relief, joy, and confidence.

Talking about the text

Discuss the following questions with your partner.

Question:- 1. What difference did you notice between the reaction of the adults and the children when faced with danger?

Answer:- When faced with danger, there were significant differences in how adults and children reacted. The adults have given up hope and are awaiting their demise with a sorrowful heart. The children are motivating them at this stage. The grownups receive moral support from the children. They show maturity and tolerance in their actions. When Jonathan declares that they are not afraid of dying if they can all be together, he demonstrates his fearlessness and courage. Sue creates a greeting card to express her love and gratitude for her parents. She has the fortitude to keep her parents in the dark about her serious injuries. In times of trouble, she didn’t want to worry her parents.

Question:- 2. How does the story suggest that optimism helps to endure “the direst stress”?

Answer:- Optimism is the will to succeed in the face of adversity. It lifts one’s spirits and makes it easier to deal with stress and difficulty. Throughout the novel, there is a sense of bravery and optimism. The family’s sole chance of surviving is due of their positive attitude.

When Jonathan responds, “We’re not afraid of dying if we can all be together,” the author’s degree of perseverance rises. Sue’s caricatures of him and Mary also enable his determination and optimism develop in leaps and bounds. The children’s cheerful approach instils optimism in the storyteller. He meticulously analyses their position before instructing Larry to navigate a 185-degree course. Though he had given up hope by that point, he didn’t show it, telling Larry that they would find the island by 5 p.m. Thankfully, their perseverance and hope pay off, as they discover Ile Amsterdam by sunset.

Question:- 3. What lessons do we learn from such hazardous experiences when we are face-to-face with death?

Answer:- Hazardous events may lead us closer to death, but they also teach us valuable life lessons. Life isn’t always a rose garden. We must be patient and steadfast in the face of perils and threats. The true test of character is adversity. Gold purity is determined by placing it in a fire. Dangerous situations bring out the best in us. Cowards die a lot of times before they die. Fear is a bad emotion that causes inaction and complete submission to events. Such sailors or soldiers are defeated in life’s battle against the odds. Persons with self-confidence, courage, resourcefulness, and presence of mind, on the other hand, bravely face all perils and conquer all misfortunes.

Their generous and compassionate attitude encourages others to fight and overcome adversity.

Question:- 4. Why do you think people undertake such adventurous expeditions in spite of the risks involved?

Answer:- Human beings are born adventurers. The greater the risk, the greater the excitement. The thrill of discovering beauty and richness buried in faraway locations encourages bold people to risk their lives in order to rest and relax. Perhaps they would rather have one hour of glory than a long life of inaction and laziness. Adventures can be dangerous and deadly at times. The failure of a few individuals does not deter true adventurers. They learn from the mistakes and failings of others and try again with more zeal. The key to a successful adventure is adapting to new surroundings and solving issues. A successful expedition gives cash, renown, and a good name. Famous explorers such as Vasco da Gama, Columbus, Captain Scott, and Captain Hook are all mentioned in history texts.

Question:- 1. We have come across words like ‘gale’ and ‘storm’ in the account. Here are two more words for ‘storm’: typhoon, cyclone. How many words does your language have for ‘storm’?

Answer:- Our language “Hindi” has the following words for ‘storm’:

Question:-2. Here are the terms for different kinds of vessels: yacht, boat, canoe, ship, steamer, schooner. Think of similar terms in your language.

Answer:- Similar words in our language for vessels that are used to travel on water are:

Question:- 3. ‘Catamaran’ is a kind of a boat. Do you know which Indian language this word is derived from? Check the dictionary.

Answer:- The word ‘catamaran’ is taken from Tamil and meaning ‘tied wood.’ It’s a boat or yacht with two hulls running parallel to each other. The dictionary defines it as “a swift sailing boat with two hulls.”

Question:- 4. Have you heard any boatmen’s songs? What kind of emotions do these songs usually express?

Answer:- The melodies of the boatmen call out to other sailors to wake up, get up, and come to the sea to discover its riches. These are motivational songs that give hope to the disgruntled and depressed boatmen.

Question:- 1. The following words used in the text as ship terminology are also commonly used in another sense. In what contexts would you use the other meaning?

(a) in a rope/string – a joint formed by tying two ends or sections of string, rope, or other material together. To tie a knot, for example.

(b) of hair – Twisting the hair at the back of the head into a spherical shape. Ria, for instance, wore her hair in a loose bun.

(c) in wood, a circular hard area in the wood where a branch once stood.

(d) Individuals – a small group of individuals standing together. For instance, at the school gate, small knots of children gathered.

(e) in muscles – a hard, tight sensation in the stomach or throat brought on by anger, nerves, or other factors.

(a) I could feel the terror in his throat, which was frequently disapproving and severe, as he expected others to obey you. For instance, his tone was solemn.

(b) Difficult and serious situations, such as when we encountered stiff opposition.

(a) In the economy/business – a growth in economic activity or commerce, as well as a period of prosperity. For instance, there has been a surge in plot sales.

(b) Popular period – an era in which a sport or piece of music became extremely popular and successful. For example, one strategy to address the growing popularity of cricket is to build new playgrounds.

(d) In the harbour/river – A floating barrier put at the entrance to the harbour to prohibit ships from leaving or entering.

(e) In Microphone – A long pole with a microphone attached to it.

(a) Food is passed through an aperture in the wall between the dining room and the kitchen. A serving hatch, for example.

(b) in a spaceship or aeroplane, a door.

(c) an escape hatch, which is a door or opening in the ceiling or floor. A hatch to the attic, for example.

(d) When a baby fish, bird, or insect hatches from its egg.

(e) to conjure up a hidden scheme, an item, or a person that evokes a sense of security. For instance, a family member who can be counted on for security, stability, or support.

(a) to firmly secure anything in place so that it cannot move. Ensure, for example, that the apparatus is properly anchored.

(b) to firmly rest something on something else. Prem’s works, for example, are set in the lives of people.

(c) Someone who reports or reads the news on the radio or television. Rihana, for example, hosted the nightly news for five years.

Question:- 2. The following three compound words end in -ship. What does each of them mean?

Answer:-  1. Airship – A big plane with no wings that is loaded with gas and propelled by motors, making it lighter than air.

(i) In the navy, the most important ship in the fleet.

(ii) An organization’s essential service, product, or building that it owns or produces. In Germany, for example, the corporation is opening a new flagship store.

Question:- 3. The following are the meanings listed in the dictionary against the phrase ‘take on’. In which meaning is it used in the third paragraph of the account:

Answer:- ‘Take on’ is used in the third paragraph of the storey in the sense of ‘take sb on,’ i.e. ‘to employ sb,’ and “to engage sb.” The words are: We hired two crew members….to assist us….

Question:- 1. Given on the next page is a picture of a yacht. Label the parts of the yacht using the terms given in the box. 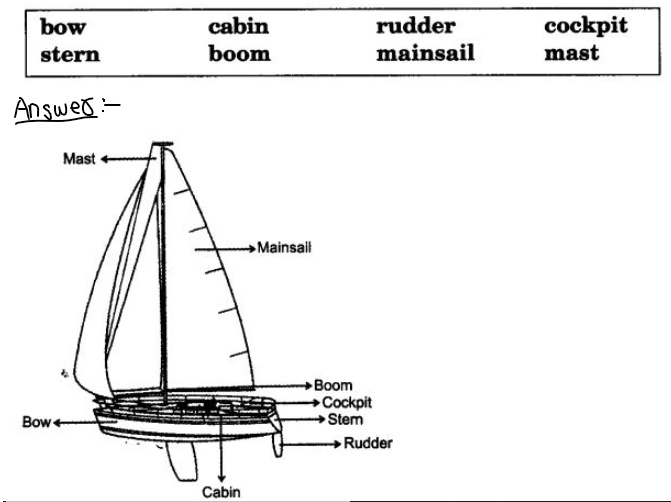