Question:- 1. Why did the king want no more talk about the hilsa-fish?

Answer:- Everyone in the kingdom was talking about Hilsa fish. This had frustated the king so he didn’t want anyone to talk about the Hilsa fish.

Question:- 2. What did the king ask Gopal to do to prove that he was clever?

Question:- 3. What three things did Gopal do before he went to buy his hilsa-fish?

Answer:- Gopal had shaved half of his face. Smeared ash on his entire body himself and wore rugs before going out to buy Hilsa fish.

Question:- 4. How did Gopal get inside the palace to see the king after he had bought the fish?

Answer:- Gopal started singing and dancing loudly in front of the palace. When the king heard the noise, he ordered that the man to be bring inside.

Question:- 5. Explain why no one seemed to be interested in talking about the hilsa-fish which Gopal had bought.

Answer:- People were more surprised by Gopal’s appearance—half-shaved face, ash on the body, and rugs instead of suitable clothes—so no one seemed interested in talking about the hilsa-fish that Gopal had purchased. They were puzzled as to what had happened to him.

Question:- 6. Write ‘True’ or ‘False’ against each of the following sentences.

(i) The king lost his temper easily.

(ii) Gopal was a madman.

(iii) Gopal was a clever man.

(iv) Gopal was too poor to afford decent clothes.

(v) The king got angry when he was shown to be wrong.

Question:- 1. Notice how in a comic book, there are no speech marks when characters talk. Instead what they say is put in a speech ‘bubble’. However, if we wish to repeat or ‘report’ what they say, we must put it into reported speech.

Change the following sentences in the story to reported speech. The first one has been done for you.

(i) How much did you pay for that hilsa?

The woman asked the man how much he had paid for that hilsa.

(ii) Why is your face half-shaven?

Answer:- (ii) Gopal’s wife asked him why his face was half-shaven.

(iii) I accept the challenge, Your Majesty.

Answer:- (iii) Gopal told the king that he accepted the challenge.

Answer:- (iv) Gopal told the guards that he wanted to see the king.

Answer:- (v) The king ordered the guard to bring the man to him at once.

Question:- 2. Find out the meaning of the following words by looking them up in the dictionary. Then use them in sentences of your own.

1.  Challenge: A call to take part in a contest or competition.

Radha accepted the challenge to won prize in the annual day celebrations.

Mr Bean is one of my most favourite comical characters.

4. Courtier: A person, who attends a royal court as a companion or advisor to the king or queen.

Birbal was a courtier in Akbar’s court.

5. Smearing: Coat or mark carelessly with grease or oil.

Before the game, wrestlers smeared their body with oil.

Question:- 1. Look at the pictures and read the text aloud. 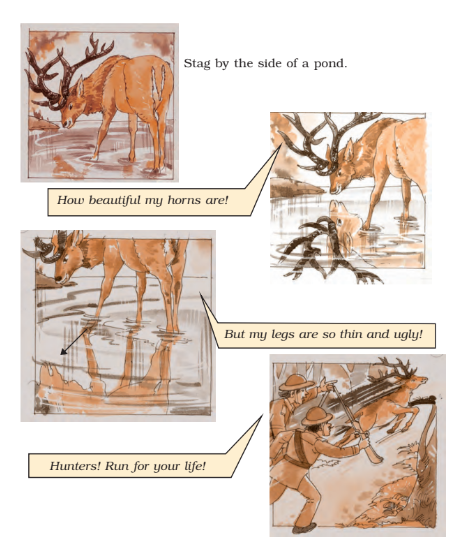 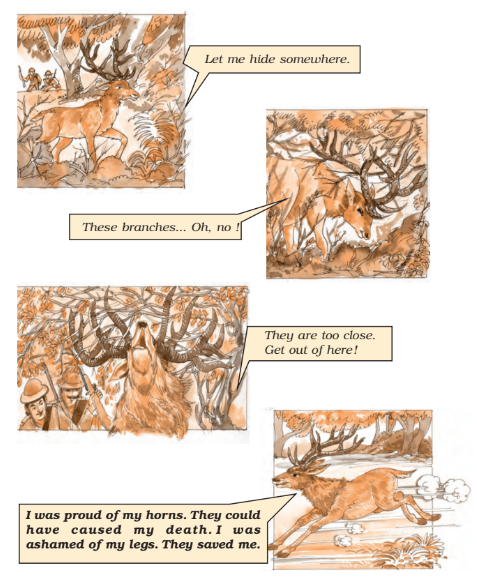 Question:- 2. Now ask your partner questions about each picture.

Answer:- (i) The stag is standing at a pond’s side.

(ii) The stag was going to drink from the pond.

(iv) No, the stag considers his legs to be frail and unattractive.

(v) The stag is running from the hunters who are chasing him.

(vi) No, he can’t hide in the bushes since his horns have been stuck in them.

(vii) The stag is being pursued by the hunters.

(viii) They’re getting close to the stag.

(ix) Because of his legs, the stag was able to run quickly and is now free.

(x) The stag claims that he was proud of his horns, but that they would have killed him. He was self-conscious about his legs, but they were instrumental in saving his life.

Question:- 3. Now write the story in your own words. Give it a title.

Answer:-  Once upon a time, there was a stag who lived in the woods. He was ready to drink water when he noticed his reflection in the pond’s water. He was ecstatic to have such lovely horns. Then he noticed his legs, which he believed were extremely skinny and unsightly.

Some hunters entered the bush one day and began chasing the deer. The stag began to run, but his horns became tangled in the bushes. He then put in much more effort and bolted away.

When he was no longer in danger, he realised that his prized horns had almost killed him. Furthermore, the legs that he thought were unsightly turned out to be his saviour.

Question:- 4. Complete the following word ladder with the help of the clues given below.

Answer:- 1. Mother will be very cross if you don’t go to school.