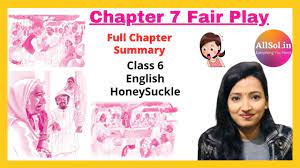 A.Match the sentences under I with those under II.

B.Who says this to whom and why?

Question 1. “Then the situation changed.” What is being referred to? (2)

Answer:- The situation being referred to is Jumman and his family’s behaviour towards his aunt. After the transfer of property, Jumman forgot his promise to look after his old aunt. He as well as his wife began to ill-treat her.

Question 2. When Jumman’s aunt realised that she was not welcome in his house, what arrangement did she suggest? (3)

Answer:- When Jumman’s aunt realised that she was not welcome in his house she suggested that Jumman should give her a monthly allowance, so that she could set up a separate kitchen for her.

Question 3. What was the villagers’ reaction when the aunt explained her case to them? (4)

Answer:- The villagers gave mixed reaction when the aunt explained her case to them. Some sympathised with her, others laughed at her and a few others advised her to make it up with her nephew and his wife.

Question 4. Why was Jumman happy over Algu’s nomination as head Panch? (6)

Answer:- Jumman was happy over Algu’s nomination as head Panch because Algu was his best friend and he knew that he would not give any judgement that went against him.

Answer:- The aunt meant that a person in the seat of a judge becomes fair and just like God. Everyone is equal for him. Hence, he cannot do injustice to anyone.

Answer:- He asked Jumman to pay a monthly allowance to his aunt or else he would have to return her property back to her. Jumman was very upset at this judgement and he began to consider Algu as his enemy.

Question 7. Algu found himself in a tight spot. What was his problem? (9)

Answer:- Algu was upset because after Algu’s verdict in favour of Jumman’s aunt, Jumman was not his friend anymore. He knew that Jumman would take his revenge.

Answer:- Jumman’s verdict was that Sahu should pay Algu the price of the bullock. He said that Algu could not be blamed for the bullock’s death. Algu was extremely happy at the verdict. He began to shout that it was the victory of the Panchayat.

Question 10. Which of the following sums up the story best?

Give a reason for your choice

Answer:-  “Let no one deviate from the path of justice and truth for the sake of friendship or enmity.” This sums up the story best because the one who occupies the position of a judge becomes fair and free. He has to give fair judgement irrespective of his personal feelings.

A. Replace the italicised portion of each sentence below with a suitable phrase from the box. Make necessary changes, wherever required.

1.The best way to avoid an unnecessary argument is to remain silent.

Answer:- The best way to avoid an argument is to keep mum.

2.Unfortunately, the train I was trying to catch was cancelled.

Answer:- As ill luck would have it, the train I was trying to catch was cancelled.

3.He has been told not to take risks while driving a car through a crowded street.

Answer:- He has been told not to take chances while driving a car through a crowded street.

4.The patient needs to be properly taken care of.

Answer:- The patient needs to be properly looked after.

5.Why don’t the two of you end your quarrel by shaking hands?

Answer:- Why don’t the two of you make it up by shaking hands?

6.I was in a difficult situation till my friends came to my rescue.

Answer:- I was in a tight spot till my friends came to my rescue.

7.When I saw a pile of dirty dishes, I felt very disappointed.

Answer:- When I saw a pile of dirty dishes, my heart sank.

8.I will examine the matter carefully before commenting on it.

Answer:- I will go into the matter carefully before commenting on it.

9.They criticised him in the meeting but he accepted without protest all the criticism.

Answer:- They criticised him in the meeting but he swallowed all the criticism.

10.It will free me from worry to know that I had done nothing wrong.

Answer:- It will ease my conscience to know that I had done nothing wrong.

B. Look at the following phrases and their meanings. Use the phrases to fill in the blanks in the sentences given below.

Answer:- 1. Why don’t you set down your ideas on paper?

Your teacher will speak the words listed below. Write against each a word of opposite meaning.

WHAT ELSE YOU'LL GET HERE

On this website you will get the latest study materials, as well as updated news and all relevant information for all boards of educations, college admissions, entrance exams, and Government job Exams..Here on this page you can get direct link for  NCERT  Book, NCERT Solutions, CBSE Latest Sample Papers, Previous Years Question Papers, CBSE Updated Syllabus, Detailed Chapters of Grammar, Essays, Letters, Applications, Updated Date Sheet of all classes , Results of board classes and CBSE & NCERT Related current NEWS on daily basis, which are important for teachers as well as for students.