Question:- 1. Who do you think your shadow looks like?

Solution:- Because when my body block light and make shadow, it appears faster than light.

Solution:- I think my shadow is the tallest in the morning because sun rays comes slanting during sunrise.

(iii) Why are he and me alike?

Solution:- (i) He here refers to the Shadow of the child.

(ii) Me here refers to the child in the poem.

(iii) He and me are alike because they look very much similar to each other.

What would you do if

Solution:- 1. I would run as fast as possible despite knowing that we should never do it.

Do you find a difference in the size of the hand on the wall?

Solution:- Yes, I notice the size of the hand becomes smaller as the torch is moved away from it.

Work in groups of five.

Make a large hand on a plain sheet.

Mark the names of fingers, thumb and palm on the hand. Use the hints given in the box. 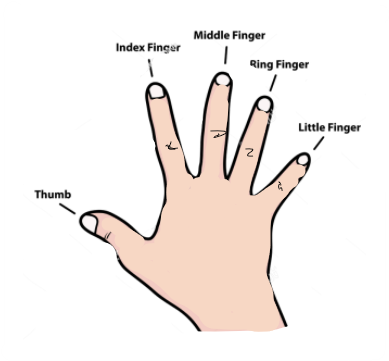 Do the actions as given below, and observe which part, or fingers, of your hand is being used.

Actions Part or fingers of your hand being used

Solution: (i) Where is the child whose parents have come to school?

(ii) I saw many houses which were quite spacious.

(iii) Mathematics, which is my favourite subject, is so interesting.

(iv) The poem that you read out, is so lovely.

(v) I know the street which he lives on.

(vi) I like reading books which have pictures in it.

(vii) The old lady whom I met in your house is my neighbour.

(i) What do you think is the name of the dog?

(ii) Why is she called that?

(iii) What colour is she?

(iv) Do you think she is friendly?

Write a few lines on Mithoo and his little dog named Shadow.

Solution: (i) I think the name of the dog is ‘Shadow’.

(ii) She is called Shadow because she follows Mithoo everywhere like a shadow.

(iii) She is of off-white colour.

(iv) Yes, I think she is very friendly.

(v) She likes to eat bones and bread.