Definition of Microorganism: living organisms around us which cannot be seen by naked eyescalled microorganism or microbes. We need a microscope to see microbes.

HOW MANY TYPES OF MICROORGANISMS ARE THERE:

There are five major groups of micro-organisms as given below:- 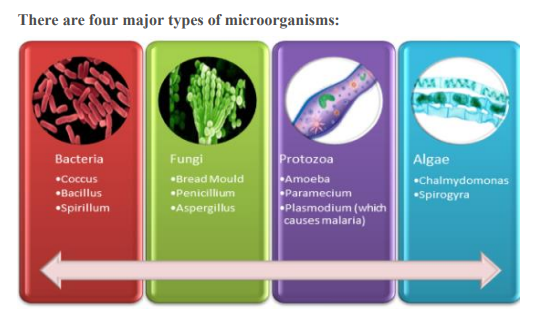 WHERE  DO  MICROORGANISMS LIVE?

Microbes can survive in all kinds of environments –

Some of Microorganisms are beneficial in many ways while some others are harmful and cause diseases.

Commercial Use of Microorganisms:

Medicinal Use of Microorganisms:

WHAT PRECAUTIONS SHOULD BE FOLLOWED WHILE TAKING ANTIBIOTICS AND WHY?

(i)Antibiotics should be taken only on the advice of the qualified doctor.

(ii)One must complete the course prescribed by the doctor.

(iii)Antibiotics should not be taken when we are suffering from a viral disease because antibiotics are not effective against disease-causing viruses.

Antibiotics taken in wrong doses may make the drug less effective when we might need it in future. Moreover, antibiotics taken unnecessarily may kill the beneficial bacteria in the body.